Remembering Steve Jobs, 10 years on, after his passing on October 5, 2011 Featured 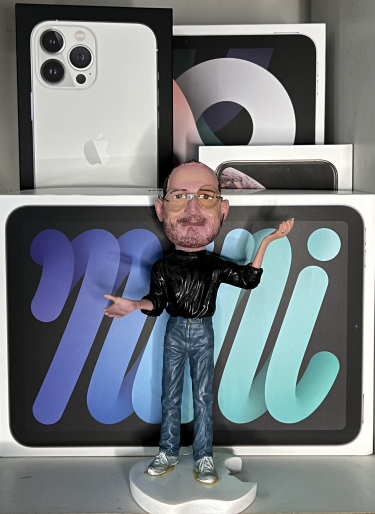 Steven Paul Jobs sought to leave a dent in the universe, and he did, changing the world with his vision and determination, creating the world's most successful technology company and changing personal computing for the better.

Steven Paul Jobs. Born on February 24, 1955 and sadly leaving us all too soon on October 5, 2011, Wikipedia describes him as an American business magnate, industrial designer, investor and media proprietor.

A co-founder of Apple, as well as its chairman and, at different times, its CEO, Jobs was also the chairman and majority shareholder of Pixar; the founder, chairman and CEO of computer company NeXT, and was on the board of The Walt Disney Company following Disney's acquisition of Pixar.

Where Microsoft, Palm, Nokia, Sony Ericsson and others tried creating pocket and palm PCs, Internet communicators and phones that introduced ever greater levels of smart technologies, Steve Jobs brought the iPhone to life with three simple concepts in one.

The iPhone was a revolutionary mobile phone, a widescreen iPod with touch controls, and a breakthrough Internet communications device with desktop-class email, web browsing, search and maps, all in one small and lightweight handheld device.

After 15 generations, we are now at the iPhone 13, and despite very impressive folding screens from Samsung, despite Google's advances in computational photography, despite the Palm WebOS phone introducing the gesture based interface that iOS and Android today take for granted, despite Android being on well over two billion smartphones worldwide, despite an avalanche of price-cutting competition from Chinese smartphone makers, Apple has prevailed.

A great deal of Apple's success is thanks to the brilliance of Steve Jobs, who demanded the best from his workers, even if his personality was reportedly abrasive at times. Jobs clearly didn't suffer fools greatly, or at all.

He had a knack for knowing what customers wanted, even if they didn't know they wanted it yet. He was courageous in ditching floppy disks and introducing USB ports years before competitors. Jobs popularised the graphical user interface, even though he borrowed the concept from Xerox at Palo Alto, and even though Microsoft has been chasing macOS for three decades and still hasn't managed to match the security, stability, ease of use and general awesomeness of any of Apple's operating systems, let alone macOS.

Jobs was the real deal. The momentum he generated for and with Apple continues to this day, and Apple has only grown stronger.

One can only imagine what else his great mind would have created, but he certainly built and left an incredible team to carry on his vision, and for that team to continue on with breakthroughs of its own.

Since then, Apple has grown from strength to strength. The iPhone is successful, probably even beyond Jobs' wildest dreams, especially given the goal for the iPhone was originally to get to a 1% global market share - something it achieved within the first year of launching. The iPad is a vastly more useful personal computing device than any competing and similarly sized computer in its class, with tons more power, battery life, a million dedicated iPad apps, a gazillion accessories and more - than all competitors combined.

October 5 is also the ten year anniversary of Siri, Apple's digital assistant, which has grown greatly in capability but which some still see as being behind the Google Assistant and Amazon Alexa.

At least, in iOS and iPadOS 15, Siri finally works offline, so asking Siri to do set an alarm, call a number, create a calendar appointment, activate a connected appliance or more no longer needs to have that request sent to Apple's servers over the Internet first.

People humoursly wondered, 10 years ago, if Siri stood for "Steve is really inside", and while that's clearly not the case, Siri has been a success - even if there are valid complaints that Siri in iOS 15 has removed features that the visually impaired community - and everyday users - have come to rely on.

We hope Apple's Siri team fixes those issues as quickly as possible - and really works hard to greatly expand Siri's intelligence and capabilities, because Siri is the natural language user interface that many people will interact with by default in the future, and Steve Jobs had the vision to buy Siri's creators and integrate it into the iPhone.

10 years on after Steve's passing, Apple is stronger than ever. Its operating systems and hardware have never been more advanced, with vastly more sophistication and power still so obviously yet to come.

Back in 2007, Steve Jobs said the iPhone put Apple five years ahead of the competition.

After 14 years, with the latest A15 Bionic processor still 50% faster than its closest ARM competitor, with the still first-generation M1 processor able to run Intel-compiled apps via the Rosetta 2 translation engine faster than an Intel processor can - and without a fan or fan noise in the MacBook Air, with Apple Watch Series 7 now finally able to pre-order and more, Apple is still years ahead of the competition.

If Steve is looking down on us, there are undoubtedly many things he would be dismayed at in world affairs, and no doubt he would have driven Apple even harder and faster over the last ten years than he had in the 30 years before, but I imagine he would be smiling and happy to see Apple having succeeded so brilliantly.

Apple has much work ahead of it to continue extending its lead, to continue championing privacy even in the face of its apparent recent missteps in scanning users personal data, even if in the cause to save children, to continue creating software and hardware that just works.

This is becoming increasing difficult. I have personally experienced TextEdit crashing on a regular basis throughout the lifecycle of Big Sur, and while it crashes less than ever before after all these updates, it still does from time to time, which annoys me greatly!

The latest Safari 15 has also started crashing randomly, which is another massive pain.

But these things will be fixed, and hopefully, Apple redoubles its efforts to place quality hardware and software above speedy releases, that it continues saying a thousand "no's" for every yes.

This decade we're expecting to see VR and AR glasses, with the augmented reality glasses more exciting to me than virtual reality. We're expecting to see an autonomous Apple Car. We're expecting to see the ultimate blending of macOS, iOS and iPadOS in a way that feels truly effortless and natural, along with hardware to match. Battery life in Apple devices lasting a week? An Apple home robot? A vastly improved Siri that will be the AI brain of that robot?

What will the M10 processor do? Power that Apple robot AI brain?

All of this and more is presumably on the drawing board, in the labs, and will be in the hands of customers in homes and businesses all across the world in the years to come.

Thank you Steve Jobs for leaving such an unmissably massive dent in the universe. You have changed the world of technology forever, and even to this day, Apple serves as the R&D division for the world's tech companies, and even with all of Apple's examples, competitors still struggle to copy Apple correctly!

To see what people worldwide have written to Apple in remembrance of Steve Jobs, you can visit Apple's Remembering Steve page here.

You can also read the text of Steve Jobs' Stanford University Commencement Address, and see him deliver it, at Stanford here.

Endless great videos about Steve Jobs can be seen at YouTube here.

More in this category: « Amazon takes its Fire TV Stick and turns it up to the 4K Max Apple Watch 7 arriving Friday 15 October, pre-orders start Friday 8 October »
Share News tips for the iTWire Journalists? Your tip will be anonymous