Radio listening via mobile and smart speakers surges in Australia 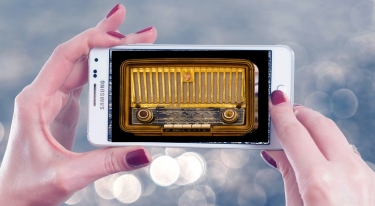 Although you still hear ads on the radio for people to buy digital radios, which do offer excellent sound quality and no need for a data plan, the latest stats show that radio listening via phones and smart speakers has surged.

My Mum loves her DAB radio - it's a really nice Philips unit with a handle, and is super easy to carry around.

The thing eats up C-size batteries on a weekly basis though - DAB radios never seem to let you turn off the light that illuminates the screen, so I've purchased Mum a brand new battery charger and eight 5000mAh C-size batteries which should mean the batteries not only last longer, but of course are rechargeable and much cheaper than using alkaline Duracells.

The other way Mum loves to listen to a range of radio stations is with her Alexa Echo Show 10 smart speaker in the kitchen.

Smart speakers are naturally controlled via your voice, and so it's super easy for her to ask for the station she wants to listen to at any time, be it a commercial station, one of the ABC stations, or 1RPH, a station that has seniors reading from Australian newspapers for seniors to listen to.

I have put Radio App on Mum's iPhone and iPad, but prefers either her DAB radio, which is nicely portable, and her smart speakers.

For me, I listen to radio on my iPhone using the ooTunes app, and I also use Radio App and Tune In. I prefer ooTunes because it records what you are listening to and lets you easily rewind to the start of when you began listening, which can be handy when you missed something, want to hear the news or weather again, or want to replay something you listened to at a previous time.

I've listened to radio via my phone for years, even doing so during the Nokia N95 days and earlier when it was more difficult to get a stream playing, although obviously not impossible.

I even much prefer to listen to radio streaming via my phone in the car, whether through my car's stereo system, or through AirPods, because AM radio is prone to interference when driving around.

It's much better quality than AM, with the only downside being that it's around 30 seconds behind the "live" radio broadcast, which can be an issue if you're trying to call a station to win some kind of prize being offered, although radio stations have tried accommodating this by saying they're looking for the "seventh caller" or something like that.

So, when Commercial Radio Australia (CRA) came out with some interesting stats, reprinted below, on people listening to radio via smartphones and smart speakers, my ears pricked up and I wanted to know more.

The commercial radio industry has "reported a strong year on year increase in the number of Australians listening to radio on their mobile phones.

"Nearly 2.5 million people, or 17% of the population in the five metro markets, listened to live and local radio via their phones at some point each week in the December quarter.

“The data is good news for the industry as it means more Australians are discovering that they can enjoy radio at any time of the day wherever they are across a range of devices and platforms from traditional broadcast to radio apps on smart phones,” explained Joan Warner, chief executive officer of CRA.

We're told "the data was derived from an average of the last three GfK radio audience measurement surveys conducted in 2020 compared to the same period in 2019.

"The research found that while broadcast radio continued to be the most common way to access radio, with 83% of people tuning in via AM/FM and 27% via DAB+ digital radio, mobile phones are the third most popular device used to listen to radio.

"Some 9% of listeners tuned in via a PC or tablet, and 7% used a smart speaker. The strong growth of 58% in the number of Australians listening via smart speakers was off a smaller base of 662,000 people in 2019."

Warner concluded: “Broadcast radio remains the core and most important platform for the foreseeable future, but we are seeing some exciting growth in digital and streaming audiences as a result of investments and partnerships in these areas to make radio even more accessible across multiple devices.”

More in this category: « Amazon's Alexa give-away plus 15% off deal ends midnight today (Feb 12 2021) Chromebook shipments 'surged by 74% in 2020 driving Windows market share below 80%' »
Share News tips for the iTWire Journalists? Your tip will be anonymous