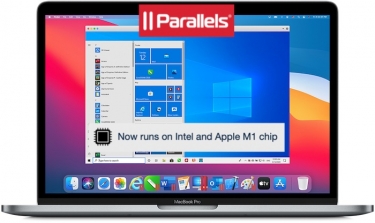 Parallels has released the highly anticipated Parallels Desktop 16.5 for Mac, which "features full native support for Mac computers equipped with either Apple M1 or Intel chips."

Windows 10 for ARM processors is available via the "Windows 10 ARM Insider Preview" and its applications on Apple M1 Mac computers.

The company says Apple's M1 chip offres superior performance which "delivers the world’s fastest integrated graphics in a personal computer, revolutionary power efficiency, and was designed to work with macOS Big Sur — which Parallels Desktop 16.5 transforms into a new standard for a seamless Windows-on-Mac experience."

Nick Dobrovolskiy, Parallels Senior VP of Engineering and Support said: "Apple's M1 chip is a significant breakthrough for Mac users. The transition has been smooth for most Mac applications, thanks to Rosetta technology. However, virtual machines are an exception and thus Parallels engineers implemented native virtualisation support for the Mac with M1 chip. This enables our users to enjoy the best Windows-on-Mac experience available.”

“We received enthusiastic feedback about the remarkable performance of both the Technical Preview of Parallels Desktop 16 for M1 Mac and Windows 10 on ARM Insider Preview as well as x86 applications and games, including Rocket League, Among Us, Roblox, The Elder Scrolls V: Skyrim, Sam & Max Save the World and many others. Testers loved Parallels Desktop’s easy-to-use features and seamless integration of Windows with macOS Big Sur, which increased productivity,” said Dobrovolskiy.

Here are two videos from Parallels on how the amazing software works and on how to install VMs in Parallels Desktop 16.5 on M1 Macs, after which the article continues with more detail, so please read on!

How to Run Windows on Mac with Parallels Desktop for Mac - Now Runs on Intel and M1 Chip:

How to Install VMs in Parallels Desktop 16.5 on M1 Mac:

The company us the virtualisation approach for Parallels Desktop 16.5 for Mac "enables users to benefit from Apple’s M1 chip performance advancements—applications run faster and more efficiently. Performance observations include:"

“I installed Parallels Desktop 16.5 for Mac and Windows 10 on ARM Insider Preview on my M1 Mac Mini because, as a math teacher, several software apps that I use are no longer supported on M1 Mac,” said Daniel Dudley, Albuquerque, NM, United States. “Running Windows on my M1 Mac in Parallels Desktop 16.5 has been awesome. It’s the fastest version of Windows that I have ever had!”

“I absolutely love being able to run Linux environments within Parallels Desktop 16.5 on my M1 Mac,” said Darren Paxton, United Kingdom. “The performance is simply amazing.”

All the best Parallels Desktop 16 for Mac features have been re-engineered for the Apple M1 chip, including:

All editions of Parallels Desktop 16.5 update for Mac support both M1 and Intel Mac computers (Standard Edition, Pro Edition and Business Edition). They can be purchased either online at parallels.com/desktop (which also offers free full-featured 14-day trials) or from retail and online stores worldwide. Parallels Desktop subscriptions include complimentary concurrent subscriptions to Parallels Access, and just-redesigned and simplified Parallels Toolbox for Mac and Windows, which are also separately available for free trials and subscriptions at parallels.com.au.

More information on Parallels Desktop 16.5 for M1 and Intel Macs is here.

More in this category: « A timely tropportunity: OPPO launches new trade-in and trade up program HP launches Australia’s first at-home ink subscription service so you never run out of ink again »
Share News tips for the iTWire Journalists? Your tip will be anonymous