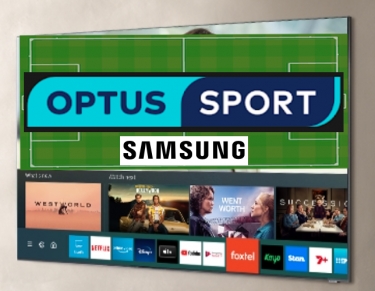 Do a search for Optus Sport on Samsung TVs and you'll see plenty of people have found ways of doing just that, but now it's officially supported in what is a very sporting decision.

Optus Sport says it has added the Samsung Smart TV platform to its "roster of compatible streaming options", but anyone with a Chromecast, or Android TV, or mirroring capability has been able to watch Optus Sport on the big screen for ages.

Still, it's always very nice when a platform natively adds an app to its system, because it's just one less piece of equipment and Wi-Fi connection to worry about, and with Optus being the purveyor of a lot of fancy football, a lot of Samsung Smart TV owners are sure to be happy.

LG managed to get a native Optus Sport app back in June 2020, so for whatever reason it has taken a bit longer to get onto Samsung Smart TVs, and it definitely has been a requested capability, so it's certainly good to see it having arrived, and even officially listed on the Australian Samsung Smart TV apps page for good measure.

Optus’ Head of TV and Content, Corin Dimopoulos said with Optus Sport expanding its device streaming options it was clear the broadcaster was building credibility as one of Australia’s most popular streaming services.

“We don’t just want to be the home of premium football, but also a mainstay on the TV‘s of every Australian.

“How we watch TV is changing by the day, and data continues to show that streaming services dominate our data consumption and viewing habits,” continued Dimopoulos.

We're told that "the new addition gives Samsung Smart TV* owners the freedom to watch Optus Sport with just a click of a button.

"Optus Sport subscribers can now simply access the on-screen Optus Sport icon on their Samsung Smart TV’s, and check out everything Optus Sport has to offer".

Dimopoulos put one in the back on the net when he added: “We want to provide an experience that not only gives our subscribers the ability to watch the world's biggest leagues at home or on the go, but also to give them the choice to watch it on their preferred streaming platform".

Commenting on the announcement, Hass Mahdi, Director of Audio Visual, Samsung Electronics Australia said “Aussies are arguably some of the most passionate sports fans in the world.

"The partnership with Optus Sports allows for our customers to have an easier way to get behind their favourite football players and never miss a goal. The way we are utilising our TVs has changed and Samsung is committed to offering more choice and experiences via the Smart TV platform.”

Samsung Smart TV users will also have access to Optus Sport’s brand-new OS Fitness platform, which provides a variety of fun and effective fitness workouts for the entire family, which is accessible via the Optus Sports app (which requires a subscription to use, although you already knew that, I'm sure).

Anyway someone passed Dimopoulos the ball again, and he got his rate rate pumping when he told us: “If you’re like me and have been spending a bit too much time perched up on the couch, the OS fitness has a heap of great at-home workouts that gets the blood pumping, all without having to leave the living room."

For those wondering what sports are available on Optus Sport, we are reminded that "Optus Sport is the home of premium football content in Australia, including exclusively live coverage of every Premier League match, UEFA Champions League and UEFA Europa League matches, as well as holding the exclusive rights to the Barclays FA Women’s Super League, FIFA Club World Cup, and Asia’s J-League and K-League."

Now, if you have a Samsung Smart TV from 2016 onwards and can apply the required software update, all you need to do is ensure you either have an existing Optus Sport account and premium subscription, or if you're a new customer, you can get access by subscribing via the Optus Sport mobile apps. You're also already eligible if you have an eligible Optus plan, so if you're already an Optus customer, check on that first.

Chances are though you're already well aware of your Optus Sports privileges, and if not, a call to the Optus call centre or calling in to an Optus Store will uncover your subscriptions tatus.

If your Samsung Smart TV is from before 2016, or you own a different TV but want to experience Optus Sports on any screen you own, then you can watch via Fetch, Apple TV, Android TV compatible Smart TVs, LG Smart TVs, Apple Airplay, Chromecast, Amazon Fire TV, Xbox, PlayStation 4, Samsung Smart TVs or on your desktop computer, or on-the-go via tablet, mobile, or laptop.

More in this category: « OPPO levels up low light photo and video capabilities of new Reno4 series, hopes to light up sales Apple Watch makes auto call to emergency 000 number after Australian man falls from ladder »
Share News tips for the iTWire Journalists? Your tip will be anonymous