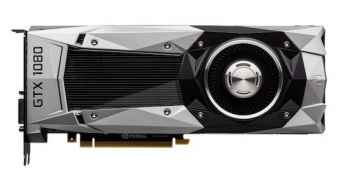 Nvidia's new GeForce GTX 1080 graphics card is the first product for the gaming market based on the Pascal GPU architecture.

When Nvidia unveiled its Pascal GPU architecture in 2014, the company said it would start shipping products in 2016.

On schedule, the Tesla P100 GPU card is already in volume production, and the GeForce GTX 1080 graphics card - Nvidia's first Pascal-based video card for gamers - will ship on 27 May.

Revealed by Nvidia CEO Jen-Hsun Huang at the DreamHack event in the US, the GeForce GTX 1080 is said deliver twice the performance and three times the efficiency of the company's Titan X card.

The NVIDIA GeForce GTX 1080 'Founders Edition' will cost US$699 (local pricing wasn't mentioned) and will be available from a number of vendors including Asus, Gigabyte and PNY. Custom versions from partners are expected to start at US$599.

For those on smaller budgets, the GeForce GTX 1070 will ship next month. It will cost US$449, with custom versions from partners expected to start at US$379.

In related news, Nvidia announced a new game capture tool plus enhancements to its VR software.

Ansel can be used by game developers to deliver superior game capture capabilities. It allows the camera to be positioned and pointed anywhere, and captures can be made at up to 32 times screen resolution before zooming in to an area of interest and optionally applying a photo filter.

It is also capable of capturing 360-degree stereo photospheres for viewing in a VR headset or Google Cardboard.

The Nvidia VRWorks SDK has been enhanced with support for the native dimensions of VR displays, rendering for both eyes in one pass. It also provides for more realistic audio by using ray tracing to model the interaction between sounds and objects, and provides accurate visual and haptic responses when hand controllers interact with virtual objects.

More in this category: « Kogan’s sub $300 ‘flagship’ 2-in-1 Windows 10 hybrid tablet Ad blocking: lost revenues for publishers topping $27 billion by 2020 »
Share News tips for the iTWire Journalists? Your tip will be anonymous