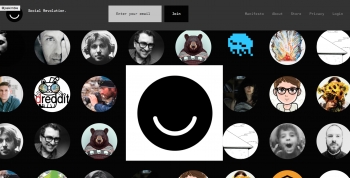 Ello bills itself as a ‘revolutionary social network’ that’s ad-free and ‘never’ sells user-data, and now it has relaunched as a V2 beta.

Want a social network that is ‘free from advertising, manipulation and exploitation?’

That was the promise of Ello when it first launched, but it quickly seemed to fizzle.

Now, Ello is back in version 2.0, as a beta, with what is presumably an enhanced ‘clean and beautiful design’ that is meant to support ‘a global creative community where people can be whoever they want to be.’

In addition, Ello says it has secured a new US$5 million rounding of funding from Foundry Group, Techstars Ventures, and FreshTracks Capital - all of whom no doubt hope Ello can emulate Facebook’s insane valuation one day, although by not selling ads or user data, one wonders how Ello will ever make any money.

There’s ‘CodePen integration’, which I’ve never heard of, but which ‘allows developers and hobbyists to write web apps and embed them right into their Ello posts.’

As you would expect, there are also technical changes behind Ello V2 which the company says ‘set the stage for rapid rollout of more features, including private messaging, private groups, and loves.’

For those wondering about iOS and Android apps, they’re on their way - due to arrive in the US ‘spring’, which is the Australian autumn.

The US is in spring now, as Australia is in autumn, so we’ll presumably see these apps sometime over the next 8 weeks.

The apps ‘will mirror Ello V2's innovative web interface, with emphasis on clean and beautiful design and full-screen browsing.’

Ello’s Co-Foudner and Co-Chief Product Officer, Lucian Fohr said: “We're listening to our community and that's helping Ello grow rapidly from the inside out.

“New features and mobile apps coming this spring will only add to people's ability to connect with others with similar interests, find existing friends, and make new ones on Ello."

Despite Ello seeming to have lost its fizz like a can of soda left open for too long, Ello clearly seeks to shake things up, noting there are ‘millions of people on the network’ ,and that ‘Ello continues to grow both users and engagement rapidly.’

Ello CEO Budnitz said: “We've seen super-active micro communities pop up on Ello around subjects like finance, art, photography, and graffiti. We've created a platform that's welcoming to all levels of participation -- from top professionals to hobbyists to people with more casual interests.”

Mark Solon, managing partner at Techstars Ventures who will be joining Foundry director Seth Levine on the Ello board said: “We're very excited with the continued momentum at Ello. This is a company whose business will literally change the world.”

Well, it will have to, else the money raised so far will be a case of Ello and goodbye.

Still, as a self-described ’for-profit public benefit corporation (PBC) with a charter that assures that Ello will never sell third party ads or user data’, there must be a business plan in there somewhere to ensure that ‘for profit’ status can be achieved.

Elmo CEO Budnitz emphasised in conclusion that: “The Ello community is leading a revolution in how people connect. Where people can be whoever they want to be, and where quality, beauty, and positivity are valued over advertising, manipulation, and exploitation."

Some decent competition for Facebook is no bad thing, so good luck, Ello - no matter how successful or otherwise you are, I suspect you’re going to need it!

More in this category: « Surface 3 re-surfaces PHOTOS: Sydney Royal Easter Show 2015 has a 'Tech Arena' »
Share News tips for the iTWire Journalists? Your tip will be anonymous