Google's Pixel 6 and 6 Pro smartphones to launch Oct 19 in US, Oct 20 in Australia Featured 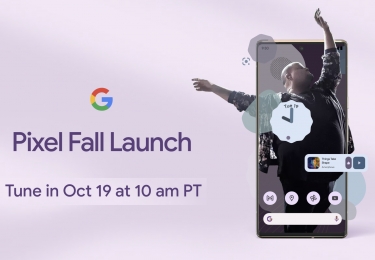 Launching on October 19 in the US, and thus October 20 in Australia, is the new Google Pixel 6 and 6 Pro smartphones, with persistent rumours a Google Pixel Fold with foldable screen is set to be the big surprise.

Equipped with Google's own Tensor CPU, which promises to be more powerful than traditional ARM CPUs with special AI sauce from Google's engineers, and rumoured to have a 4x optical zoom on the Pixel 6 Pro model, Google's new Pixels are clearly going to be the company's most powerful yet, and set to be as big a challenge to Android comoetitors as possible.

If the Pixel 6 Pro does come with a 4x optical zoom, this would be one zoom level higher than Apple's iPhone Pro and Pro Max offering a 3x zoom, but lower than the 5x zoom Motorola's flagfship Edge 20 Pro offers, and lower than the 5x and 10x zooms Huawei was offering last year and the year before that with its P and Mate series phones, let alone the 3x optical and 10x optical zoom lenses of the Samsung Galaxy S21 Ultra.

Even so, Google will no doubt be amping its computational photography cred to the max with both Pixel 6 models, and will presumably be launching the biggest marketing campaign it has ever launched to fight back against the new iPhones, Samsung's new Folds and Flips, and the vast array of impressively mid-range priced smartphones from Nokia, Motorola, Realme, Oppo and various other companies.

There's also the persistent rumour that Google will launch a Google Fold model that works similarly to Samsung's Galaxy Fold 3 smartphone, because Android 12.1 is said to have code specifically designed to accomodate folding screen phones, and if so, it would be a big surprise to most people who aren't following the tech blogs, and would be a feature Google offers that Apple still doesn't.

So, if you're up at 4am on October 20th, you can watch the event at what I presume will be here.

This same page currently has a cool little series of animations that showcase various features of the new Pixel 6 models, and which let you press the spacebar on your computer to "change the mood," and it's a nifty little promotion.

Here's the Pixel 6 and 6 Pro promo video from early September:

Here's a video that purports to show and have info about the Google Pixel Fold phone:

More in this category: « EPOS unveils new flagship H6Pro series closed and open acoustic gaming headsets Windows 11 arrives, claimed to be start of a new era for the PC »
Share News tips for the iTWire Journalists? Your tip will be anonymous