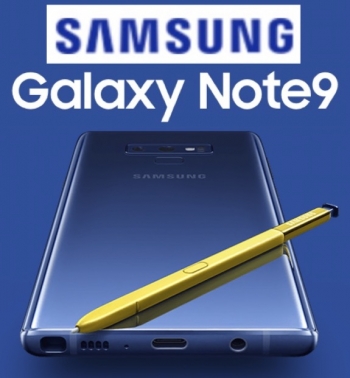 From a massively enhanced S-Pen through to advanced cameras, a 512GB storage option, 6.4-inch display, 4000mAh battery and more, Samsung is doing its utmost to reign supreme as the No.1 Android.

When it comes to smartphones, the undeniable market leaders are Apple with its iPhones, and Samsung with its Galaxy S series, and the Note series, headlined by today's launch of the Galaxy Note9.

Sure, Huawei has grown in massive leaps and bounds, companies like OPPO seek to challenge with the Find X, Google tries hard with its pure Android Pixels but doesn't sell them in the huge volumes it wishes it could, and a plethora of Android makers fight it out for market share and profits.

But it's still Samsung that the tech world looks to as the No.1 Android maker, enjoying its status as the most successful and popular Android smartphone and tablet manufacturer, even as it eschews Android for Tizen on its smartwatches.

So, what has Samsung announced, and what are its executives saying about the new model?

Well, before we go on, and there's a stack of videos and infographics embedded in this article, let's start with the keynote itself:

D.J. Koh, president and chief executive of IT & Mobile Communications Division at Samsung, said: "The Note has always been our showcase for premium technology and industry-defining innovation, and Galaxy Note9 is no exception.

"It’s designed for a level of performance, power and intelligence that today’s power users want and need.

“Note fans are Samsung’s most loyal; we know they want it all, to get the most out of work and play, and Galaxy Note9 is the only phone that can keep up with their busy lives.”

"It is built on years of innovation, refinement, and listening to our customers to deliver the features they need so they can achieve more in their day.

“Our Galaxy Note customers are among our most loyal and enthusiastic supporters. Each year this smartphone showcases our latest innovations, which is why Note fans continue to stay dedicated to this device.

“Mobile technology powers our lives and today’s power user needs a device that can keep up with their demands, including a long-lasting battery to get you through the day, ample storage and of course speed. The Galaxy Note9 delivers all this and more.

"We know Australians are going to love this device and we’re excited to support it with a great pre-sale offer.”

Going on sale in Australia on 24 August, Samsung naturally has a special pre-order offer available for those who order before that date.

Samsung says that "customers who pre-order the Galaxy Note9 from a participating retailer before 24 August, will receive the Galaxy Note9 512GB for the advertised price of the 128GB model, with the offer ending 23 August".

Samsung reminds us of the obvious in 2018: "People rely on their smartphones for almost everything they do – all day, every day.

"They need a phone that can keep up without having to find the nearest outlet to recharge, delete pictures to free up storage for their next snap, anxiously wait for their video to download before boarding their flight, or deal with any lag time when gaming.

"They need a phone that won’t let them down and Galaxy Note9 delivers."

Here are all the features and benefits:

"All day battery: Galaxy Note9’s 4000mAh battery, the largest ever on a flagship Galaxy phone for long-lasting power to use all day to talk, text, play games and watch movies from morning to night.

"Store more, delete less: Galaxy Note9 is available with two internal storage options – choose from 128GB or 512GB. And with the ability to insert a microSD card, Galaxy Note9 is 1TB ready to have peace of mind knowing there is enough room for favourite photos, videos and apps (as you can add a microSD card of up to 512GB in size).

"Speed and power: Galaxy Note9 is a super powerful smartphone with cutting-edge 10nm processor and support for the fastest network speeds available in the market (up to 1.2 gigabits per second) to stream and download without slowing down.

"The evolution of the S Pen: The S Pen is the signature feature of the Note series – it’s how users have made their mark, and how Samsung has expanded the notion of what a smartphone can do. What began as a tool for writing and drawing is now putting more power and control in their hands."

"Now with Bluetooth Low-Energy (BLE) support, the new S Pen delivers an entirely new way to use the Note. With just a click, it’s now possible to take selfies and group pictures, present slides, pause and play video, and more. Developers can even integrate the S Pen’s new, advanced BLE functionalities into their apps later this year."

Samsung has an in-depth look at "A mobile remote control: the Galaxy Note9's Connected S-Pen" here.

"The intelligent camera that makes pictures perfect: It can be hard to take a picture that looks just like the ones the pros take – but it shouldn’t be. Galaxy Note9 builds on Samsung’s industry-leading camera technologies with new capabilities that take the work out of getting the perfect picture.

Samsung has an in-depth look at "Stellar shots every time: The Galaxy Note9's Intelligent Camera" here.

Naturally, Samsung describes the Note9 as delivering "premium experiences: from work to play"

The Infinity display: Billed as "the cornerstone of Samsung’s design heritage", and Galaxy Note9 has the largest edge-to-edge display ever on a Note. The 6.4-inch Super AMOLED Infinity Display provides a truly immersive multimedia experience.

"Galaxy Note9’s Infinity Display is complemented by stereo speakers, which are tuned by AKG and have the ability to deliver Dolby Atmos immersive audio for a life like experience. Mobile video has never looked or sounded better than it does on Galaxy Note9. YouTube named Galaxy Note9 as a Signature Device able to deliver a best-in-class YouTube experience".

Samsung has an in-depth look at "The power to do more: the Galaxy Note9's high-performance features" here.

"When connected to a monitor, Galaxy Note9 can power a virtualised desktop and even serve as a fully-functional second screen. Take notes with the S Pen while watching a video, or use Galaxy Note9 as a trackpad, to right-click, drag and drop, and use multiple windows on a monitor. It’s never been easier to be more productive."

As you'd expect, Samsung has packed the Note9 with "premium Galaxy technologies" which come as standard: fast wireless charging, IP68 water and dust resistance and Samsung services such as Samsung Health and Samsung Pay.

Samsung also informs us all that "Galaxy Note9 opens up a world of possibilities – it’s a portal to the full Samsung ecosystem of devices and services".

For instance, Samsung says you can "use Galaxy Note9 and SmartThings to control connected devices, or get more done with Bixby, a personalised, intelligent assistant.

"And with the launch of Galaxy Note9, Samsung is making it easier to enjoy music with a new long-term partner, Spotify. The partnership makes Spotify easily accessible to seamlessly sync and transfer music, playlists and podcasts across Galaxy Note9, Galaxy Watch and Smart TV products."

Samsung has also launched its new Galaxy Watch, available from 4 October, in 46mm and 42mm sizes, in Midnight Black, Silver and Rose Gold, with the cellular model "from $649" and the Bluetooth model "from $549".

We'll have a separate article soon, in the meantime you can read more about it at Samsung here.

Here are the specs, after which are Samsung's infographics:

Display
6.4-inch Quad HD+ Super AMOLED, 2960x1440 (516ppi)
Screen measured diagonally as a full rectangle without accounting for the rounded corners
Default resolution is Full HD+ and can be changed to Quad HD+ (WQHD+) in Settings

Carrying an IP68 dust and water resistance rating. Based on test conditions of submersion in up to 1.5 meters of fresh water for up to 30 minutes

May differ by market and mobile operator

May differ by market and mobile operator
User memory is less than the total memory due to storage of the operating system and software used to operate the device features. Actual user memory will vary depending on the operator and may change after software upgrades are performed.

May differ by market and mobile operator

Payment
NFC, MST
May differ by market and mobile operator

Here is the Galaxy Note9 vs Galaxy Note8 comparison infographic, click here or on the image for the full resolution version:

Here is the "Experience the power of the Galaxy Note9" infographic, click here or the image for the full resolution version:

Here is the "Think you know the S Pen? Think again" infographic, click here or the image for the full resolution version: 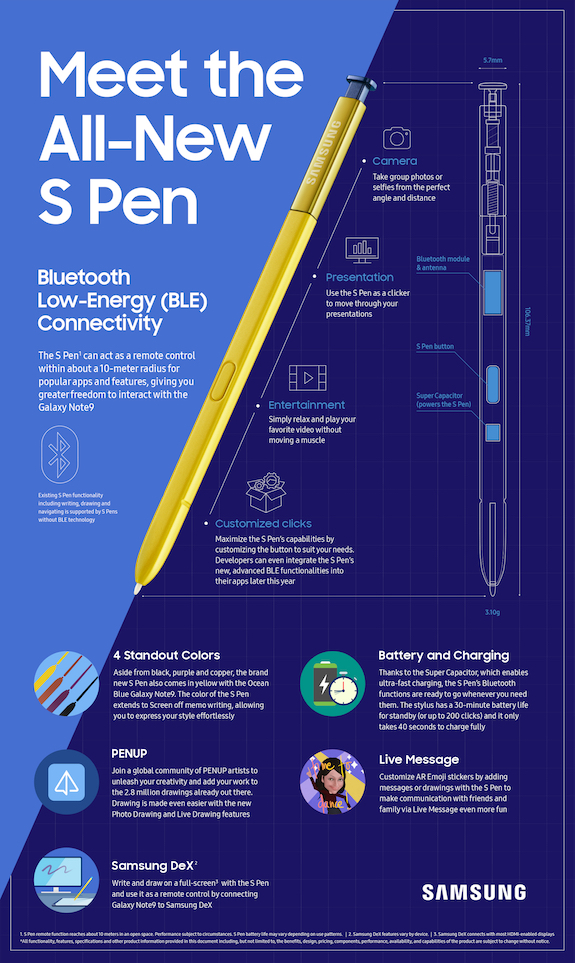