Digital inclusion on the up, but more needed to bridge access, digital ability gap: report Featured 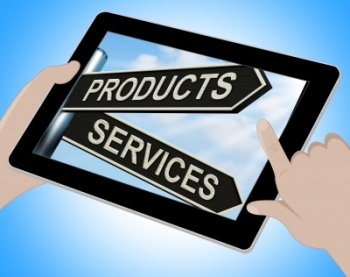 Digital inclusion in Australia is continuing to improve but there are still areas in the community where more targeted investment and development is needed to ensure greater access to digital services, according to a new report.

The report, by Roy Morgan, commissioned by Telstra with RMIT University and the Centre for Social Impact at Swinburne University of Technology, found that while  progress on improving Australia’s Digital Inclusion is being made, there are significant demographic groups where investment is needed to bridge the gaps on access and digital ability in particular.

The survey looked at areas of digital including essential and community services and other interactions which are increasingly moving online, from paying bills to organising the next social outing and planning the day. 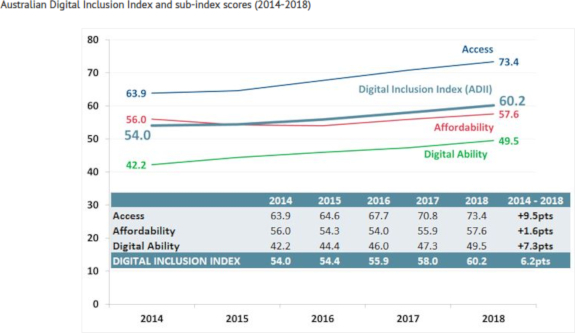 And the survey found that the NBN rollout has had a positive effect on access as seen by the 2018 ADII results for Tasmania.

With the NBN rollout largely complete in Tasmania and between 2017 and 2018 there was a rise of 8 points in its digital inclusion score.

The Affordability score of 57.6 represents an increase of 2.1 points from a year ago, and while cost per gigabyte of data is falling, Australians are spending more time online and more money on Internet services. 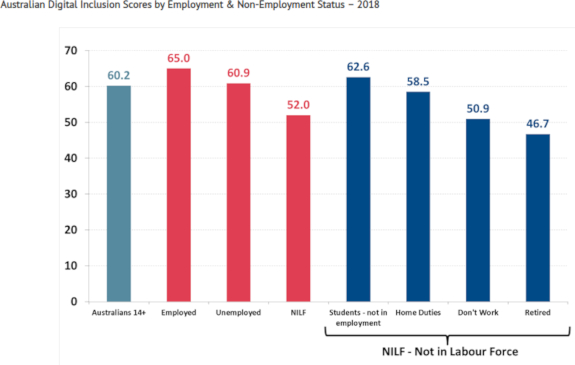 The digital ability score of 49.5 was the lowest of the three sub-indices digital inclusion index, but has improved significantly over the last four years, increasing by 7.3 points since 2014.

But, the report notes that this top-line view of Australians "not in the labor force" doesn’t show there are clear differences within that broad category which includes students not in employment (62.6), those conducting home duties (58.5), those who don’t work (50.9) and retired Australians (46.7).

Australians who "don’t work" or are "retired" are lower than the average Australian across all three sub-indices of access, affordability and digital ability, while the common characteristic that significantly lowers the overall digital inclusion scores for both categories is digital ability. 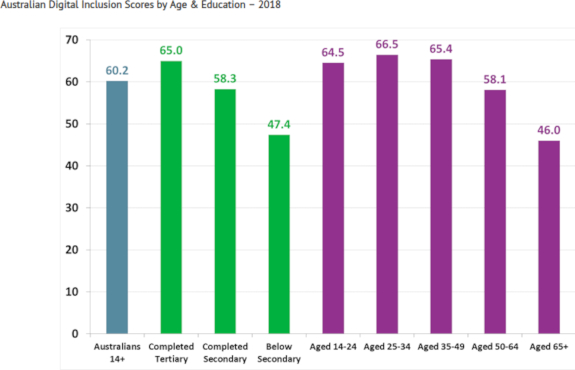 The Index also found that:

“The ADII measures progress on improving access to the Internet, the digital abilities of Australians encompassing online skills and activities, and attitudes to learning about new technologies, and the affordability for Australians taking advantage of growing digital infrastructure around Australia.

“The integration of these three variables into one digital measurement, the ADII, delivers an ongoing portrait of Australia’s digital inclusion. When assessed across demographics and geography, governments, industry bodies, and technology businesses are able to pinpoint and work to minimise the divide between the ‘haves and have-nots’ of digital inclusion.

“If affordability falls it will have a negative impact on the digital inclusion of Australians on lower incomes because they have less discretionary income to spend than wealthier Australians. In 2018 the affordability score of 57.6 represents an increase of 2.1 points from a year ago, and is now above the initial score of 56 in 2014. While cost per gigabyte of data continues to fall, Australians are spending more time online and more money on Internet services.”

More in this category: « How to watch (or rewatch) the Huawei Mate 20 Pro launch in London live VIDEOS: Apple pre-orders for iPhone XR start, on sale Friday 26 October at Apple, Telstra, Optus and Vodafone »
back to top