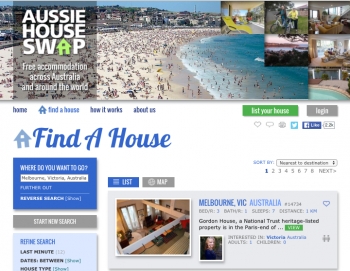 Not all peer-to-peer sharing economy platforms like Airbnb, Uber or Aussie House Swap offer consumers the same levels of protection. With the popularity of these sites exploding as a result of trusting Australians embracing the more creative ways of both making and saving money, you should recognise the potholes to avoid in this so-called ‘sharing economy’.

One huge pothole is the trustworthiness of reviews. Sites like Airbnb, which allow people to rent their homes and bedrooms to others, and Uber, an app which connects drivers directly to passengers, have quite transparent review processes.

Each party—guest and host or passenger and driver—has the chance to leave a good or bad review of the other person and if enough bad reviews are accumulated it’s possible that person will be barred from using the service.

Let’s take an experience I had recently. I listed my small two-bedroom inner-city quirky apartment to swap one weekend a month with someone living near the Yarra Valley.

Another Aussie House Swap host, who owned a house near a regional centre on the Great Ocean Road, contacted me. He was looking to swap for three weeks in January because his son had a short-term summer job in Melbourne.

“Sorry,” I told him. “I only want to swap for the occasional weekend with someone near the Yarra Valley so I can go horse riding.”

And that, I thought, was that. Not so. He called back a couple of days later.

“I can organise for my neighbour to take you riding,” he said

“No,” I said. “I can’t take time off work and I need good Internet to work.” “I have the nbn running past my front door,” he said.

I was wavering but by then had bookings for six separate Airbnb guests during the same three weeks he wanted to stay.

“… and water my plants?” I love my window-sill garden of assorted herbs and vegetables.

“And water your plants,” he agreed.

Finally I agreed and next time he was in Melbourne he visited my apartment. I wasn’t home but my friend showed him around and explained how hosting Airbnb guests requires changing and washing sheets and towels, and ensuring the apartment is dusted and vacuumed in preparation for each guest. He was given cash for the consumables the Airbnb guests would use.

In January I went to his 6-bedroomed house near the Great Ocean Road where I was responsible for a menagerie of pets, including dogs, chickens, a lizard and countless pot plants situated in a 3-acre garden leading down to a creek

I got to know the neighbours, bought some local honey from a bee keeper, picked my own fruit from a nearby farm, commuted the 3-hour train trip to and from Melbourne to attend the occasional meeting, and generally had a lovely time.

During one of those Melbourne visits I dropped into my apartment to organise a courier and walked in on a disaster area. There were four teenagers (the entire family was staying there) with their assorted luggage and paraphernalia spread from one end of my small apartment to the other, complete with two Airbnb guests in the guest room—7 people and only 1 bathroom. This was definitely not part of our deal but I let it slide thinking at least the place would be clean when I returned. Not so. It was worse

The dishwasher was full. The sink was covered in dirty dishes and saucepans.

The carpet was filthy with a huge blob of sticky red stuff stuck in it (now a stain).

There was a terrible smell and none of the beds had been changed. The shower and toilet looked scary. There was a thick mantle of dust over everything. My guest umbrella and some silver was missing.

And all of my pot plants had died. In addition to the vacuuming, dusting and dishes, I had to wash and change the two sets of bedding and the doona cover of my best woollen doona, which had been used as an extra mattress, then just discarded in the living room

Needless to say I had left the country home — 4 long travelling hours before — in immaculate condition with a full tank of petrol in his car and an expensive bottle of red wine on his kitchen bench. This in addition to the gift certificates to four High-Teas at the luxurious and iconic Windsor Hotel as an extra thank you for hosting the Airbnb guests

I called, in shock, to ask my house swap partner why he hadn't even bothered to change the sheets.

PITFALL 1: Wrong. On this particular site all reviews are vetoed by the person you leave the review for, so if they don’t like your review, and obviously he didn’t, they simply delete it.

PITFALL 2: It was time to go a step higher so I sent an email to Aussie House Swap asking them to call me to discuss this incident, because there is no telephone number on their website.

They refused, opting for a long drawn-out email exchange instead, during which I was required to organise emails from independent witnesses to support my claims and discredit his. All to no avail. They did nothing. [Update to the story: The company has since included a contact phone number on its site.]

Lessons learned from this exercise is that not all peer-to-peer platforms are safe or comparable. Before joining any of them, ensure they have adequate procedures in place to handle disputes. At the very least you need to be able to speak to a representative in person.

Also ensure that the reviews published, represent an honest cross-section of views.

When Aussie House Swap was asked to comment on this story, the public relations manager responded by email with the following statement: “We considered introducing a ratings system, but have decided against it because we feel that it would have an overall negative impact on the site, outweighing any potential benefits.”

How useful is an online service if it doesn’t allow you to leave an honest review? I’ll leave that for others to decide.

More in this category: « Damn I spilt my coffee on the keyboard – drowned the mouse Huawei MateBook – Windows 10 tablet »
Share News tips for the iTWire Journalists? Your tip will be anonymous