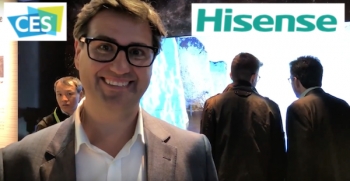 At CES 2018, Hisense announced that Australia would be the first country to receive Hisense-branded OLED TVs, for even though TV makers all have tech to compete against OLED panels, it's clearly worth offering an OLED choice to custsomers who want it.

With LG the only major OLED TV-size panel maker in the world, OLED TVs on the market from companies other than LG are using LG panels, but offer their own video-processing chipsets, Smart TV experiences, and other features to differentiate themselves from their competitors.

Over the past few years, Hisense has built itself into a major tech brand competing with the top tech titans, and aiming for even greater glory through its sponsorship of the FIFA 2018 Soccer World Cup to be held this year in Russia, so it's no surprise to see the company broadening its televisually technological horizons.

Hisense has made the move into stunningly sharp and colourful Laser TVs, as previously reported, and while they're not officially coming to Australia this year, Laser TVs are an important part of Hisense's US line-up.

Hisense also has its 4K ULED range, which I had a look at last year, and which Hisense has evolved this year with 1000 zone local dimming improving contrast range and enhancing picture detail.

Talking about the upcoming Hisense OLED TV range, Andre Iannuzzi, head of Marketing at Hisense Australia said: "In 2017, we experienced the strongest demand ever in the Australian market for our premium ULED 4K products.

“We’re thrilled to complement our already successful ULED range by providing Australian customers with even greater choice in the Hisense premium range – the Hisense OLED TV.

“Hisense aims to provide our customers with the latest technologies and the introduction of OLED in our TV lineup is yet another example of how we are responding to consumer demand by offering a choice of both leading technologies.”

Availability, pricing and specifications for the Australian OLED TV launch are yet to be confirmed, but Hisense says "local information will be available in H1 2018".

Here's my video interview with Iannuzzi on the CES 2018 show floor at the Hisense stand, talking about Laser TV, OLED TV and more, with the article containing information about the Hisense 2018 ULED range thereafter, and with two more videos, including a tour of the Hisense CES 2018 exhibition space:

So, what does Hisense have planned for its expanded 2018 premium range in 2018?

In addition to OLED TV and building on Hisense’s strong sales success in the local market, Hisense says it is "enhancing its award-winning ULED 4K range, announcing 1000 zone local dimming on select models, and expanding technologies such as Smooth Motion, Quantum Dot and UHD Premium Certification across its range, bringing to life a more premium viewing experience".

Hisense states its "1000 zone local dimming technology sees the LCD panels divided into 1000 different zones, which can be dimmed and brightened independently of one another. This allows for improved contrast range, as well as greater detail in shadows".

"The ULED 4K TV range is set to feature the latest Quantum Dot and Ultra HD Premium technologies. Quantum Dot is inserted between backlight and LCD to improve the colour gamut, with the expanded colour palette allowing for more detailed imagery.

So, what are some of the other improvements we'll see this year?

Better smarts:
"To accompany enhancements to the visual experience, Hisense has also announced an evolution of its Hisense Smart TV platform for its 2018 models, VIDAA U 2.5, an intuitive interface that allows for both a personal and fast viewing experience.

"VIDAA U 2.5 boasts improved boot times and channel switching response, as well as a new mobile application, available on both Android and iOS devices, that acts as a virtual on-screen remote to allow customisation of favourite Apps, channels and inputs."

Iannuzzi added: “Our customer feedback to our ULED range has been overwhelmingly positive and we are always looking for opportunities to evolve our technology to ensure it remains at the forefront of the television industry.

"The enhancements Hisense has made to its 2018 ULED 4K range continue to provide Australians with feature-packed, high quality products."

Here's the tour of the Hisense CES 2018 exhibition space:

Hisense also had some laser-inspired entertainment on display for the massive crowds:

The writer attended CES 2018 as a guest of AMD and Hisense.