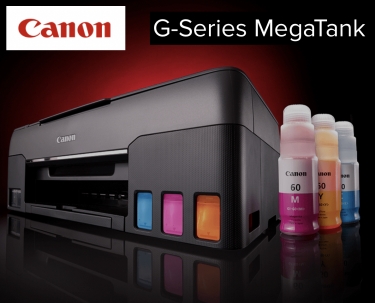 In a time when ink cartridges are much harder to find due to the ongoing pandemic and so many still working from home, making colour laser printers hard to find as well, Canon's MegaTank cartridges promise to contain as much ink as thirty standard cartridges.

Lest you think that Canon's MegaTank is truly new, it has actually been around for a while, and is a new rebranding of the PIXMA Endurance range of home and office printers, which the company says better reflects its "Continuous Ink Supply System" or CISS.

It also presumably takes advantage of Epson's existing "tank"-style branding, which has been in the market for more than a decade.

PIXMA Megatank is said to be a “new sub-brand to encompass its popular range of Continuous Ink Supply System (CISS) home and office printers”, with the former name of PIXMA ENDURANCE not having endured, but instead, having evolved.

Rather than admitting MegaTank sounds a bit like EcoTank, which would probably invite a lawsuit, Canon simply states that the MegaTank brand “better aligns with the capabilities that Canon’s CISS solutions provide small businesses and consumers.”

Canon tells us its PIXMA MegaTank products “have the potential to achieve ink cost savings of up to 95% on typical A4 prints, while one set of Canon CISS ink bottles can carry a yield of more than 30 standard ink cartridges compared to existing standard home printers.

“This is due to black MegaTank CISS ink bottles generating up to 6,000 pages, while colour ink bottles can generate up to 7,000 pages each - helping Australians print for longer without needing to constantly replace inks.”

The company tells us its “MegaTank rebrand comes at a time when hybrid working and learning have become the new norm.

“As indicated by Canon’s 2020 home printer sales data, Australians are looking for long-term home office printing solutions that will reliably and continually support their print needs without causing business downtime or driving up personal overheads.

“In 2020, Canon Australia’s overall demand for home printers increased by 39%, with Canon’s CISS range growing by 159% year on year. This made CISS the fastest growing segment in Canon’s consumer print category”.

Brendan Maher, Senior Product Manager, Canon Australia, said “the spike in home printer sales can be attributed to many Australian families and professionals purchasing home office supplies to function from home during the COVID-19 lockdown.”

Maher said: “2020 saw a resurgence in the value of home printers across the nation as Australians embraced working, learning, and creating from home.

“A year later, home offices are no longer considered temporary fixtures in the Australian business landscape, and Australian families and professionals are realising they need more reliable technology products than the stop-gap solutions they purchased last year to simply get through.

“In 2021, Australians are no longer in pure survival mode, and are looking to invest in office solutions that are both financially and environmentally sustainable. Canon’s MegaTank range is built to meet this exact demand,” continued Maher.

Canon explains the refillable design of its MegaTank range “enables remote workers and small business owners to operate on much lower costs per print while achieving less business downtime. One MegaTank printer has the potential to save users up to 95% on ink costs when printing typical A4 documents and purchasing ink at the RRP.

“In comparing the cost of ink per page between a standard-capacity ink cartridge set and refillable MegaTank CISS ink bottles: Applying the current RRP of the inks, a standard-capacity cartridge set can be calculated to be $0.361 per page or $181 per standard ream of paper (500 pages) using PIXMA HOME TS3460 and the print yields of each ink calculated in accordance with the International Standards.

“Comparatively, the cost of ink for a MegaTank CISS printer can be calculated as $0.0157 per page, or $7.85 per standard ream of paper (500 pages) using the PIXMA G3600 MegaTank. The MegaTank CISS option is therefore a best-in-class solution for long-term for cost savings.

“This reduction in ink costs is further aided by the fact that each MegaTank printer comes with a full set of refillable ink bottles in the box with the potential to last for months to years. This thereby reduces the number of traditional monthly or quarterly trips to office supply stores to purchase replacement ink cartridges and the expenditure that ensues.”

Guided by its global Environmental Vision, ‘Action for Green’, Canon says it “constantly works to reduce global environmental impact through its business activities and product innovations.

“In Australia, Canon reduces the impact of its sales, marketing, and logistics activities by increasing the use of renewable energy, reusing products and parts where possible, and actively promoting national product stewardship and recycling programs.

“Given one set of ink bottles from the MegaTank range yields more than 30 standard ink cartridge sets, Canon has been able to reduce single-use plastics in the supply chain, making its MegaTank printers environmentally conscious additions to Australian home offices.

“In adopting its ‘Action for Green’ approach, Canon reduced its 2020 lifecycle emissions per product by an average of 4.7%, beating its target of 3%. Since 2008, this has contributed to a 40% reduction in overall Lifecycle CO2 per product unit.

“Locally, Canon Australia is a long-term partner of environmental organisations such as Australia and New Zealand Recycling Platform (ANZRP) and Close The Loop, working to ensure it plays its part in minimising waste and working towards a circular economy.”

Peter Tamblyn, Close the Loop Sales and Marketing Manager commented: “Canon Australia is a founding partner of the Cartridges 4 Planet Ark program managed by Close The Loop, a zero waste to landfill organisation, and works very closely with us to ensure plastics, such as those from ink bottles can be recycled and repurposed into new products such as ink for artists or local roads.”

More information about the Canon MegaTank range is here.

More in this category: « Telstra starts 7-day iPhone flash sale, up to $150 off a new iPhone Much rumoured Apple event now CONFIRMED: April 20 in the US, 3am AEST April 21 in Australia »
Share News tips for the iTWire Journalists? Your tip will be anonymous