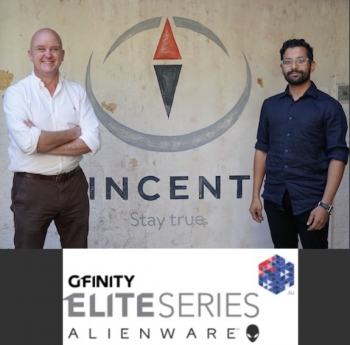 With esports a fast-growing, global phenomenon which can see live crowds in the tens of thousands, and millions more tuning in online to watch the world’s best video gamers battle it out for prestige, professional prize money and even national pride, esports lets elite gamers tell their parents it was worth playing computer games all those years.

For the rest of us, including new and existing Australian fans watching the Gfinity Elite Series, we'll either have to re-double our efforts at becoming esports elites, or will simply have to have our time and levels of engagement rewarded with the innovative, new, tradeable cryptocurrency that is Incent.

The following day, 4 November, "Gfinity’s ‘Rocket League’ will be broadcast live on Network Ten’s Channel 11, with viewers able to interact and follow the action using their TV sets and digital devices", so instead of pay-per-view, you now have "paid"-per-view.

Incent co-founder and chief executive Rob Wilson, pictured above left, said the deal is the culmination of two years’ hard work developing a truly scalable, world-class digital currency platform that is simple, flexible and secure to use, and added:

“This is a massive opportunity for Incent to plug in to one of the world’s fastest-growing communities and introduce it to a completely unique, simple and frictionless means of acquiring a tradable digital currency that is theirs to keep, and does not expire.

"This is the first ever mass-market application for crypto in Australia — if not the world — and we’ll be putting crypto into the hands of tens of thousands of new users as a result of this one partnership alone.”

For those who don't know, or need a refresher, Incent runs on the "Waves blockchain, which has been lauded for being able to handle vastly larger transaction volumes than the Bitcoin or Ethereum blockchains, for dramatically less cost, while also boasting best-practice security capabilities".

According to Dominic Remond, chief executive, Gfinity Esports Australia, Incent is the "ideal platform to help it drive deeper engagement with its already tech-savvy audiences, while yielding valuable data and insights to inform marketing and broadcast programming".

“Esports and blockchain are a natural fit and we look forward to working with Incent at the vanguard of this exciting new trend in entertainment and sport, where fans and players will be able to interact and share value in an entirely new way,” Remond added.

"There are currently over 5000 individual members signed up to the platform to earn INCNT from close to 400 merchants. Incent expects this number will grow four-fold on the back of the deal announced today."

According to the Interactive Games and Entertainment Association’s Digital Australia 2018 Report, 67% of Australians play video games, and almost half (47%) are women. And while video games were once considered just for kids, the average age of an Australian gamer today is 34.

A third of Australian gamers report they have watched esports, of which 10% watch to follow an Esports team, with 52% tuning in to watch the best in action and learn tips to improve their own gaming skills.

Wilson, 48, is a former British Naval Officer with over 30 years in the armed forces. He started looking into Bitcoin and other digital currencies back in 2015, and made some well-timed investments which have helped fund Incent the past two years. Prior to Incent he created cryptocurrency directory Bitscan.

Kaduthodil, 31, was the youngest and one of the first, senior security architects hired by the Australian Department of Defence. He was named 2018 CTO of the year at the recent 3rd Annual Fintech Awards for his work in helping to democratise crypto-currency in Australia.

More in this category: « Hi-tech BBQ for your Cup Day festivities Higher prices for new MacBook Air, Mac mini and iPad Pro »
Share News tips for the iTWire Journalists? Your tip will be anonymous