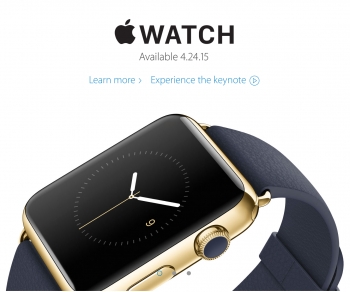 Apple has delivered big time with a stunning Apple Watch presentation that delivers on its promises and shows the competition how a smart watch should really be done.

I’ve just finished watching Apple’s ‘Spring Forward’ keynote address, and the company hasn’t just knocked it out of the park, but has once again changed the technology world’s orbit.

The MUST-SEE keynote event is already available for replay, just click here and enjoy it!

From showing competitors how to truly make an ultra slim ‘book’, through to showing competitors exactly how a smart watch should not only be made, but work, Apple sets the standard the tech world says it aspires to emulate but rarely shows with its competitive offerings.

After all, say what you want, but there are two types of tech products out there: Apple’s, and everyone else’s. It’s why Apple Stores are packed wherever you go around the planet, yet Microsoft Stores in US shopping malls, often very close by, are famously scratching for a few warm bodies besides its own retail staff.

It’s why Samsung tells us about design for its Galaxy S6 while Apple redefines design, redefines the materials it works with, redefines user interfaces, redefines the way batteries are made, why it redefines entire categories and shows us all how things should be done.

It’s not hype, it’s not Apple fanboy-ism. It just is, and it’s obvious when you look at everything Apple does and how it does it.

If the rest of the world - if people in general - lived and worked the way Apple’s people and products do, we’d be living in utopia. After all, it was in the Financial Times piece on Jony Ive from last week that noted ‘Luxury is a state of being’ for Ive. We really all can live, love, work and play at a much higher level, and we should all be inspired to do it, whether we use Apple products or not.

So, enough of the introduction, let’s get to Apple Watch today, I’m covering the new MacBooks in a separate article.

Although Apple left Apple Watch until last in its presentation, let's start with it. Due to launch in Australia and eight other countries from Friday, April 24, it is wonderful to see that Australia has made the cut as one of the launch countries.

The other countries include Canada, China, France, Germany, Hong Kong, Japan, the UK and the US.

Apple Watch isn’t just what is arguably the most accurate wrist-worn timepiece ever made, it isn’t just a revolutionary new and intimate communications device, it isn’t just a super-personal fitness coach, but it’s a new computing paradigm, a new computing interface that is with you, a time saver that will reduce the amount of time you spend staring at your phone and which will clearly become an indispensable part of your life.

There is so much Apple didn’t say about the Watch today that it has already explained at last year’s Apple Watch unveiling, but which will soon become natural for all Apple Watch owners, we’re all about to learn a lot more, especially with the mention of a couple thousand apps for the watch already on the way.

Tim Cook, Apple CEO said: “Apple Watch begins a new chapter in the way we relate to technology and we think our customers are going to love it. We can’t wait for people to start wearing Apple Watch to easily access information that matters, to interact with the world, and to live a better day by being more aware of their daily activity than ever before.”

From the ‘Digital Crown’ through to ‘Force Touch’ on the screen, from the ‘Taptic’ haptic feedback engine through to the inbuilt speaker and microphone to accept calls and interact with Siri, Apple Watch blows away the competition - and it’s just in version 1.0!

It also offers Apple Pay, so you can pay for things with your watch.

Let third party apps transform the way you do things, too. An example given was of the presenter’s daughter arriving home without her keys. The presenter was able to message her back by voice, which was transcribed to text (although he could have sent the voice file as well), which was that he would open the garage door.

Opening up the relevant app, he could see a live feed of the camera inside his garage, with the button labelled ‘open’. Tapping the button caused the door to start scrolling open, and his daughter and a friend came inside on their bikes. So simple and yet so cool, this isn’t just a watch. It’s a next-gen computing, communications, fitness, work, convenience, productivity and more device that sits on your wrist.

Battery life is rated at ’18 hours’ but that’s all the detail Tim Cook gave on that front. No doubt we’ll learn a lot more soon from Apple’s website, from upcoming user experiences and more, but the pre-launch rumours suggested just a two hour recharge, and while Tim Cook made no mention of it today, it was reported that he said he wears his watch when he showers - but all of those additional details will clearly become confirmed, and surely well before the April 24 launch date.

But we do know about the charging - a MagSafe device that magnetically clips onto the back of the watch - no exposed contacts, no weak magnets, no clicking into weird chargers - it’s Apple’s simple elegance at play once more. Apple’s media release also promises ‘quick charging’.

Pre-orders start from April 10, and in Australia, Apple Watch Sport starts at $499 for the 38mm version and $579 for the 42mm version - this one has an aluminium case that’s 60% stronger than traditional aluminium alloys and the previously announced ion-strengthened glass screen.

The more premium Apple Watch with a new stainless steel blend that’s 80% stronger than traditional steel with the previously announced sapphire display starts at $799 and goes to $1629 for the 42mm, while the luxurious Apple Watch Edition with custom rose or yellow 18-karat gold alloys has a starting price ‘from $14,000’.

Apple says its Watch collection ‘will also be available to preview or try on at Galeries Lafayette in Paris, Isetan in Tokyo and Selfridges in London on 10 April. Apple Watch will be for sale on 24 April at these select department store shop-in-shops, and at boutiques in major cities across the world including colette in Paris, Dover Street Market in London and Tokyo, Maxfield in Los Angeles and The Corner in Berlin.’

Apple Watch requires iPhone 5, iPhone 5c, iPhone 5s, iPhone 6 or iPhone 6 Plus running iOS 8.2. or later - with iOS 8.2 now available for download - just go to the settings on your phone, then general, then software update and get it.

So - this is the smart watch to get in 2015, surpassing what Android Wear or Gear S watches can do quite handily. Now the rest of the industry knows what it must match and beat - it will be interesting to see what competitors do next, but for now, I’m definitely looking forward to Apple Watch.