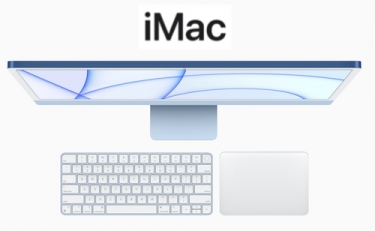 Apple has worked hard to create its best iMacs and iPad Pros yet, bringing delight and joy to consumers while making competitors wonder just how much their sales will drop in the face of Apple's newest harvest.

Apple has introduced an all-new iMac featuring what it claims is "a much more compact and remarkably thin design, enabled by the M1 chip."

Apple's claims that the new iMac "offers powerful performance" in a design that’s just 11.5 millimetres thin, with a striking side profile that practically disappears is true, as an M1 MacBook Air user myself, there's no doubting the power of this processor.

Meanwhile, the thin profile of the iMac and its vibrant colour choices will make the iMac the eye candy businesses want in their offices, as was the case back with the original Bondi Blue and other coloured iMacs that Steve Jobs launched when he returned to Apple.

Of course, having a powerful processor and the world's best operating system able to run a huge library of iPad and iPhone apps as well as all Mac apps, enveloped in a swish new design, and it's hard to see how these new iMacs won't be incredible smash hits that start taking an even bigger chunk out of the PC industry.

Apple has a full media release filled with tons of detail, but Apple's own iMac page at the Apple site are a much nicer way to absorb all of this information, but this new iMac redesign only makes you wonder about the coming sleek, slim and svelte designs in store for any new MacBook, and the next versions of the MacBook Air and MacBook Pro, presumably with an M2 processor, let alone the larger 16-inch MacBook model that hasn't been upgraded to the M1 processor as well. 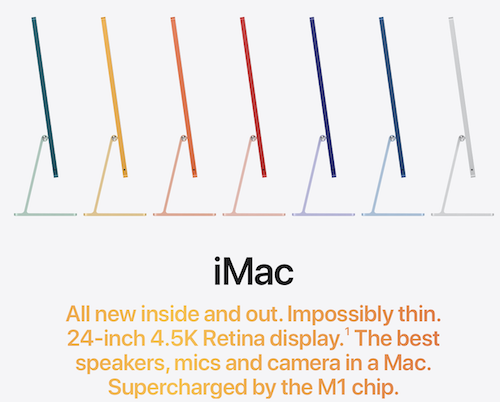 “With its striking design in seven stunning colours, its immersive 4.5K Retina display, the best camera, mics, and speakers ever in a Mac, and Touch ID, combined with the amazing performance of M1 and the power of macOS Big Sur, the new iMac takes everything people love about iMac to an entirely new level.”

Apple does remind us that, thanks to the powerful yet power-efficient M1 processor, the M1 iMac "features a thinner and more compact design that is remarkable from every angle.

"Enabled by the system-on-chip architecture and amazing power efficiency of M1, the logic board and thermals are dramatically consolidated and reduced in size compared to the previous generation’s, allowing the side profile of iMac to practically disappear. The much more compact design reduces the volume of iMac by 50 per cent,1 allowing it to take up less space and fit easily in even more places."

There are also seven colours to choose from - the traditional silver, but also green, yellow, orange, pink, purple and blue - and it's no surprise to see Apple claim "the new iMac design personalises and elevates any space unlike any other computer. iMac features softer colours and thinner borders on the front to allow users to focus on their content, while the back pops in bold, saturated colour. To complete the simplified design, iMac comes with a new power connector that attaches magnetically and a beautifully woven 2-meter-long colour-matched cable."

When combined with its high efficiency, unified memory architecture, and the 16-core Apple Neural Engine, Apple says the new iMac delivers powerful performance when compared to standard models of the 21.5-inch iMac, including:

All of the details are at Apple here, but pre-orders start on Friday, April 30, and availability begins in the second half of May, with pricing from A$1899.

Then there's the new M1-powered iPad Pros, which are now available in configurations of up to a whopping 2TB, a doubling of the previous limit.

With an upgrade to a Thunderbolt port, which has the same connector as USB-C, along with "ultra fast 5G', all of the speed the M1 delivers, and a new Liquid Retina XDR display on the 12.9 model, and the iPad Pro is an absolute powerhouse that does its best to position the iPad Pro as the ultimate portable Apple device.

Indeed, should the M1 iPad Pro be able to run Mac apps compiled to run on iPad Pro models, Apple will have achieved what Microsoft tried but couldn't do with the Surface - the ultimate all-in-one portable computer.

Of course, we're yet to see what the story is on Mac app compatibility, but Apple isn't calling the new iPads "the most powerful and advanced iPad Pro ever, pushing the limits of what’s possible on iPad" for nothing. 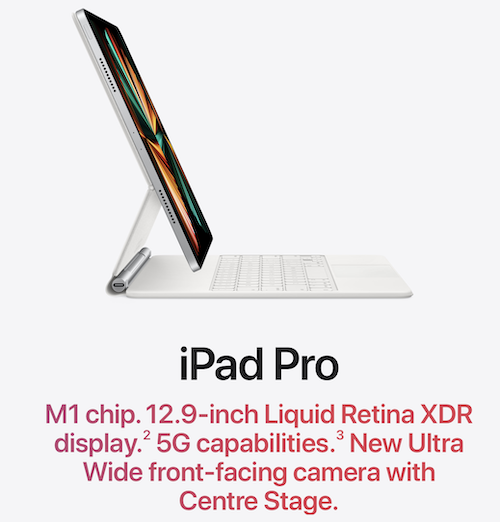 "Cellular models with 5G deliver even faster wireless connectivity when on the go, and to provide users with pro-level throughput for high-speed accessories, iPad Pro now includes support for Thunderbolt.

"Additionally, an all-new Ultra Wide front camera enables Centre Stage, a new feature that automatically keeps users perfectly framed for even more engaging video calls. The new iPad Pro is available to order beginning Friday, 30 April, on apple.com/au, and will be available in the second half of May."

Greg Joswiak, Apple’s senior vice president of Worldwide Marketing said: "The revolutionary M1 chip has been a breakthrough for the Mac, and we’re incredibly excited to bring it to iPad Pro.

“With M1’s huge jump in performance, a groundbreaking extreme dynamic range experience on the 12.9-inch Liquid Retina XDR display, up to 2TB of high-speed storage, Thunderbolt expansion, a four-speaker audio system, pro cameras with LiDAR Scanner, blazing-fast 5G connectivity, an amazing video-calling experience with Centre Stage — combined with the advanced features of iPadOS and a powerful pro app ecosystem all in a device users can hold in one hand — there’s nothing else like iPad Pro.”

"Engineered with a new cutting-edge mini-LED design that uses over 10,000 LEDs across the entire back of the display, the Liquid Retina XDR display features up to 1000 nits of full-screen brightness, 1600 nits of peak brightness, and a phenomenal 1 million-to-1 contrast ratio to enhance creative workflows.

"The result is a stunning visual experience that reflects what can be seen in the real world by capturing the brightest highlights and the most subtle details in even the darkest images. Now creative professionals, including photographers, videographers, and filmmakers, can view and edit true-to-life HDR content on a large display they can take anywhere.

Of course, the new iPad Pro is capable of much, much more, with Apple stating during the keynote that "iPad is a magical sheet of glass that can be anything you want it to be". T

If you haven't yet watch Apple's one hour keynote, it is an absolute must-see event, and is embedded below.