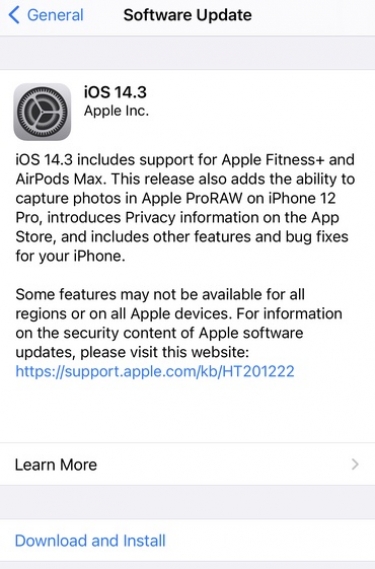 Apple has likely launched more of its operating systems too for other devices, but an annoying bug in Big Sur with TextEdit not quite fixed yet, while iOS 14.2 brings ProRAW photography to iPhone 12 models, Fitness+ and more!

It's Apple operating system update time again, and as always, when Apple launches point updates to its operating systems, it's usually to fix bugs and to introduce new features.

iOS 13, for example, was particularly buggy in its early versions, and thankfully, iOS 14 hasn't suffered the same fate.

Updates to iOS 14 have fixed bugs, of course, but the long awaited Apple Fitness+ has finally arrived, whether at the monthly cost fo the individual service, or as part of an Apple One subscription.

Apple has also introduced support for its new AirPods Max headphones, which seem to be more highly priced than is usual for Apple products, but which nevertheless seem to be getting good reviews, albeit with people complaining about the price.

There's a new "privacy" panel for apps in the App Store, which will include a developer-reported summary of the app's privacy practices, which will hopefully encourage developers to be more respected of people's privacy in a way that makes it easy for consumers to decide whether they want to install that particular app, or not.

The long awaited App Clips make an appearance, too, allowing retailers, for example, to show a code that allows a portion of an app to be fired up at payment time, for example, giving the benefits of a particular app without needing to go through the process of downloading and installing it first.

The TV app now makes it easier to find Apple TV+ content, while the Health app gets the ability to "indicate pregnancy, lactation, or contraceptive use in Cycle Tracking in the Health app in order to better manage period and fertile window predictions".

Of course, there's more, with a welcome update to macOS Big Sur 11, which was, in some areas, slightly in "Bug" Sur territory, but which otherwise has been an excellent update to macOS that has brought both macOS and iOS closer together, while ensuring the macOS is still its own distinct OS.

TextEdit in Big Sur - which I use as my primary text editor - is no longer crashing or unable to go backwards properly when you press the left arrow, but it still doesn't show text properly when you paste in a slab of text - the cursor is in the right spot, but the text is blank until you press the up arrow. It's a bit of a worry when the simplest app gets broken for no obvious reason and can't be fixed in the first update, but I have no doubt that Apple will get this fixed - lots of people love TextEdit and Apple will be hearing their complaints loud and clear!

UPDATE 16 December 2020: TextEdit just crashed on me - so Apple hasn't quite fixed the TextEdit issue yet, showing Big Sur is still Bug Sur - at least, in certain situations. My workaround was - and will now continue to be - to turn TextEdit plain text into formatted text, before turning it back into plain text before copying and pasting into the iTWire CMS.

You can find out more about watchOS 7.2 at Apple here, AppleInsider has info on tvOS 14.3 here, while MacWorld has more info on Big Sur 11.1 here.

TV app
– An all-new Apple TV+ tab makes it easy to discover and watch Apple Original shows and movies
– Enhanced search so you can browse by category such as genre, and see recent searches and suggestions as you type
– Top search results shown with the most relevant matches across movies, TV shows, cast, channels, and sports

Health
– Ability to indicate pregnancy, lactation, or contraceptive use in Cycle Tracking in the Health app in order to better manage period and fertile window predictions

This release also addresses the following issues:
– Some MMS messages may not be received
– Contact groups failed to display members when composing a message
– Some videos would not appear correctly when shared from the ‌Photos‌ app
– App folders may fail to open
– Spotlight search results, and opening apps from Spotlight may not work
– Bluetooth could be unavailable in Settings
– MagSafe Duo Charger could wirelessly charge your ‌iPhone‌ at less than the maximum power
– Wireless accessories and peripherals using the WAC protocol could fail to complete setup
– The keyboard would dismiss when adding a list in Reminders while using VoiceOver

More in this category: « AMTA'S top five holiday safety messages for phone ownership and use Zoom lifts 40-minute time limit on free accounts on some days »
Share News tips for the iTWire Journalists? Your tip will be anonymous