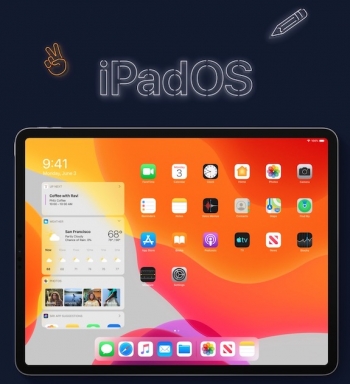 The "Easter egg" of wired and wireless mouse and trackpad support in accessibility options was left out of the keynote, but so much was packed in that iPadOS is the world's most interesting new operating system.

iPadOS. It was once "just" iOS, but with iPads afforded such a giant canvas compared to an iPhone, the iPad version of iOS has grown in leaps and bounds. You can see a preview of iPadOS here at Apple - definitely recommended to check out!

You can also watch the entire WWDC 2019 keynote here - don't get shortchanged by those "WWDC 2019 in 10 minutes" videos - you deserve the full experience for yourself!

Today, Apple renamed its OS as iPadOS, and given it is the only tablet with over a million apps specifically designed for the various iPad screen sizes, the iPad is the world's most advanced tablet - far more advanced than any Android tablet, and with modern and much better apps than the vast majority of Windows x86 apps out there that can run on Windows desktops and tablets.

iPadOS also started life as a touch-first operating system, rather than having it inelegantly bolted on as was and effectively still is the case with Windows, and despite calls for years to allow mouse control on iPad, Apple has held firm - but the time has finally come.

Apple holding firm has meant nine years of discipline, and nine years of the world's most advanced touch-first apps, both on the iPhone size screen and those of various iPads. No-one can match Apple's touch-first revolution, especially in the tablet space.

However, now, in 2019, the suggestion by of accessibility driven mouse support by Federico Viticci before WWDC 2019 has proven absolutely true, and while the mouse cursor isn't the traditional arrow, the cursor can do everything a finger can do, which presumably means the text selection that word processor users have wanted.

The first to confirm mouse support post release of the iPadOS beta was Steve Troughton-Smith, as can be seen in this Tweet below.

I certainly look forward to trying it out when the public iPadOS betas are launched!

Henry T. Casey has also published an article in Tom's Guide with more detail on how the mouse works with iPadOS, here.

And with the updates that allow hard drives, USB sticks and SD Cards (via USB adapter) plugged into the USB-C port able to be seen an individual drives and have files directly accessed via the Files app, as well as photo manipulation apps able to directly access photos via SD cards rather than have them imported into the photo gallery first, Apple has solved the two main issues reviewers had with the iPad Pro and iOS 12.

So, alongside introducing "new ways to work with apps in multiple windows, more information at a glance on a redesigned Home screen and more natural ways to use Apple Pencil", what are the other benefits that Apple has introduced to iPadOS that iPad users can try in public beta format from July, as a general release in the US Fall and our Southern Hemisphere spring, and that Apple developers can download and try immediately should they so desire?

“iPad transforms how people work and express their creativity, and with iPadOS, we’re taking it even further by delivering exciting capabilities that take advantage of its large canvas and versatility. iPadOS delivers exciting features, including a new Home screen with widgets, more powerful multitasking and new tools that make using Apple Pencil even more natural.”

"The Home screen has been redesigned with a new layout to show more apps on each page. Today View can now be added to the Home screen, allowing quick access to widgets for at-a-glance information, including headlines, weather, calendar, events, tips and more."

Do More with Split View and Slide Over

"iPad users can now work with multiple files and documents from the same app simultaneously with updates to Split View, or can quickly view and switch between multiple apps in Slide Over.

"For example, customers can compose an email while viewing another email side by side or access multiple apps like Messages or Calendar with just a swipe. App Exposé provides a quick view of just the open windows for any one app with a simple tap."

More Ways to Use Apple Pencil

"With iPadOS, Apple Pencil is even more integrated into the iPad experience. Customers can now mark up and send entire webpages, documents or emails on iPad by swiping Apple Pencil from the corner of the screen.

"A redesigned tool palette gives quick access to tools, colour palettes, shapes, object eraser, a new pixel eraser for removing any part of a stroke and a ruler for drawing perfectly straight lines. Apple Pencil feels even more natural, using advanced prediction algorithms and optimisations to reduce its industry-leading latency to as low as 9 milliseconds."

"The Files app is a central place to quickly access and manage documents, and with iPadOS, it gets even better with iCloud Drive support for folder sharing. Anyone with access to a shared folder will see it in iCloud Drive and will always have the ability to access the latest version.

"iPadOS also supports external drives, allowing users to easily plug in USB drives, SD cards or log into an SMB file server, all from within the Files app. A new Column View with high-resolution previews helps users navigate directories, while support for Quick Actions such as mark up, rotate and create PDF make it easy to be more productive on iPad. iPadOS also introduces local storage, zip and unzip, and new keyboard shortcuts."

"Safari is more powerful than ever on iPad. iPadOS automatically presents the desktop version of the website, scaled appropriately for the iPad display, and optimises it for touch, so web apps like Google Docs, Squarespace and Wordpress work great in Safari on iPad.

"Text editing on iPad receives a major update with iPadOS, making it easier and faster to point with even more precision and speed, select text with just a swipe and use new gestures to cut, copy, paste and undo."

So, when is it available?

Apple tells us the developer preview of iPadOS is available to Apple Developer Program members at developer.apple.com right now, with the public beta program to be available to iPadOS users later this month at beta.apple.com.

iPadOS will be available this spring as a free software update for iPad Air 2 and later, all iPad Pro models, iPad 5th generation and later and iPad mini 4 and later.

The iPadOS preview page at Apple can be seen here.

More in this category: « Apple iOS 13: a dazzling must-have update when it launches in US autumn, our spring New Chromebooks for 2019: Google's answer to Windows, Mac and iPadOS »
BACK TO HOME PAGE
back to top