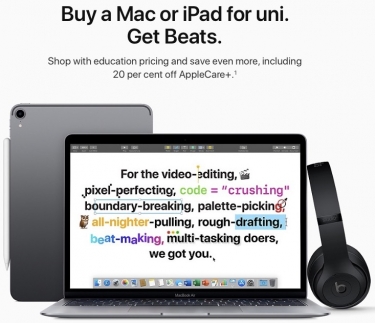 University students are being offered special pricing from Apple on Macs and iPads, with the added bonus of Beats Studio3 Wireless headphones, a free year of Apple TV+, as well as special pricing on various apps and Apple Music.

If you're heading to university, you already know it's a costly endeavour, so when there are educational discounts on offer, they're always worth considering.

Apple has been in the education space for years, and has long offered educational discounts, so this isn't a new move from Apple - the company is just taking the opportunity to remind students who'll soon be heading back to Uni or going there for the first time that it has Macs and iPads on offer, with the sweetener of a free pair of Beats Studio3 Wireless headphones.

Apple's uni-student education pricing offers are here, with the company stating "you could save up to A$320 on Mac, or A$80 on iPad, and get a free set of Beats Studio3 Wireless headphones, plus a free year of Apple TV+", as well as the ability to "save 20% off AppleCare+", too, and discounts on some accessories.

Who qualifies for this pricing? We're told it is "all current and newly accepted uni students, parents buying for uni students, and teachers and staff at all levels are eligible to receive Apple Education Pricing on Mac, iPad and more".

Now, it's true there are a lot of Windows PCs out there too, including many models at prices that are too cheap to be of use to speed hungry millennial for whom instant gratification isn't instant enough, who will be aghast at the dog-slow processors and spinning hard disk drives those deceptively cheap models offer.

There are also many Windows PCs over $1000 and well beyond that. It's the more expensive Windows PCs that offer similar performance to similarly priced Macs, which goes some way to explaining why Macs seem more expensive, but as always, the price of something alone is not the true determinant of its value.

Macs have a lower total cost of ownership, as reported by companies such as IBM which gave its employees the choice between using Macs and Windows PCs, although IBM certainly isn't the first company to discover this reality. On a personal level, I switched to macOS back in 2011, and for me at least, along with others I've helped switch to the Mac platform - we've discovered that once you go Mac, you never go back.

Sure, Windows 10 has made strides in being easier and more consistent over its lifetime, but Macs are much more elegant to use, virtually trouble-free compared to the troublesome reality of Windows, easier to backup, more stylish, with plenty of software including an influx of new iPad titles converted to work on the Mac thanks to Apple's efforts in making this possible and more.

Now, it is worth noting that Microsoft is also offering student pricing, which you can see here, and while its Surface Laptop 3 at the base configuration costs the same A$1699 before student discounts as the MacBook Air in its base configuration, Microsoft does have cheaper Surface Laptop 2 models, as well as Surface tablet models that are also cheaper, although with those, as with iPads, you'll need to buy a keyboard, if not also the stylus or Apple Pencil, to make full use of the capabilities on offer.

Still, as noted before, knowing the price of something is not the same as knowing the value of something, so do your research as to which platform you think is best for you. There's Windows PCs, Chromebooks, Macs, iPads and PCs loaded with Linux, but if you're a student, and you want to get a Mac or iPad, then a discount is a welcome thing.

Apple also offers trade-in pricing to "get credit towards a new Mac or iPad", although you might find the second hand market delivers a higher price.

In any case, Apple says "you could get credit towards a new product when you trade in an eligible device", and that "if your device is not eligible for credit, Apple will recycle it for free — it’s good for you and the planet", although again, if you're not happy with the trade in value, you're not obligated to take what Apple offers.

The company has other deals for students, which include the following:

— Apple Music Student Plan: University students are eligible for a special half price student rate on their Apple Music subscription.

So, if you're in the market for a new computer or tablet, you certainly have plenty of choices available, and more than one place to get an educational discount. There's also the second hand and refurbished markets as an option, especially in the world of Apple, where older Macs, iPhones and iPads are at great prices, but there's always something to be said for brand spanking new equipment.

Which ever way you decide to go, may the force be with you to infinity and beyond - and happy studies!

More in this category: « Remo MOV & MP4 Video Repair Software - how I fixed my corrupted video files Tenda launches one of Australia's most affordable whole home mesh Wi-Fi systems at Officeworks »
back to top