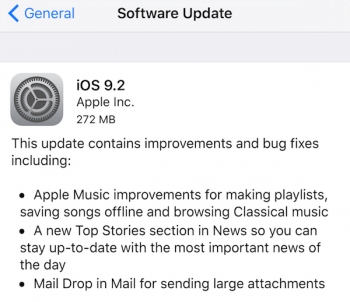 A host of new OS updates from Apple has arrived, ready to squish bugs, deliver new features and make things even crunchier!

It’s gadget update time for Apple device owners, with OS updates for your iPads, iPhones, iPod Touches, Macs of all kinds and updates for the new fourth-gen Apple TV.

A bug that was reportedly causing the iPad Pro to hang after being charged overnight is said to be squished with iOS 9.2.

Meanwhile, iOS 9.2 itself has a host of other updates, fixes and features, from improvements to Apple Music, Apple News, iPhone support for USB camera to Lightning port adapters to import photos and more (all listed below).

Depending on your iDevice, the update appears to be 200 to 300MB in size for OTA (over the air) updates.

In tvOS 9.1, users now have the ability to search for music by voice, and in Apple Music, to ask Siri to play a genre of music. You can also use the iOS remote app.

The full list of iOS 9.2 improvements is below, please read on:

iOS 9.2 is now available to download from the Software Update section of the iOS Settings app. According to Apple, the update contains improvements and bug fixes, including:

More in this category: « No CHOICE but to travel safely this summer? Retail specialist Point Inside points to 2016 retail tech trends »
Share News tips for the iTWire Journalists? Your tip will be anonymous