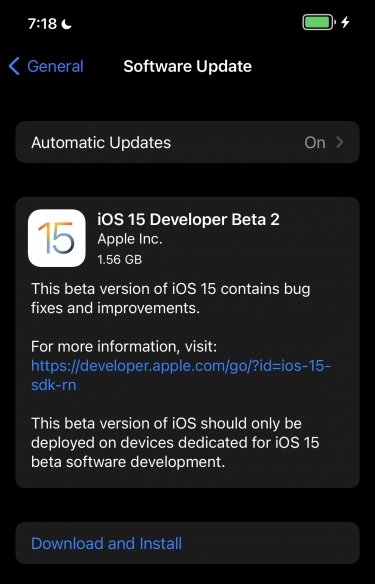 The second developer betas for iOS 15, iPadOS 15 and watchOS 8 have arrived for developers, but whether there will be a third or even fourth developer beta before the public betas arrive in July is yet to be seen.

If you're a developer, or a brave public user who has found out how to download the developer betas before the public betas arrive in July, then the second developer betas have arrived.

I've been using the iOS 15 developer beta on a spare iPhone, and while I definitely haven't used the beta on my primary iPhone, the first developer beta has been surprisingly stable and usable.

Of course, not all of the features that will be launched to the public when the betas go live are switched on or working, but so far, the second developer beta of iOS 15 on that spare iPhone has also been working smoothly, or at least, as far as I can see.

The iOS Beta Reddit is a great place to see what bugs developers have discovered with the first and second developer betas, and are a great warning to general users not to jump into the betas yet, or at least, certainly not with primary devices.

Of course, some people have done that, and you can find guides on the Internet on how to go back to iOS 14.6.

Either way, iOS 15, iPadOS 15, macOS 12, watchOS 8 and the other operating systems Apple has for its various devices look fantastic, and already, when I use Safari on iOS 14.6 on my primary device, I am definitely missing the great features that Safari on iOS 15 offers, such as smooth switching between tabs, and the address bar being at the bottom of the screen, rather than at the top.

The iOS weather app is also much better than that of iOS 14, and without a doubt, iOS 15 and other other new operating system versions are excellent upgrades that will be definitely worth getting later this year.

Whether you'll want to wait for 15.0.1, or even 15.1 is yet to be seen - it's always wise to let others find the bugs if you don't want surprises - but personally, the moment that 15.0 goes live, I'll be upgrading right away, remaining bugs be damned, and I'll probably be upgrading well before that with the public betas, if not the second or third releases of the public betas, if I'm feeling like being adventurous - which I probably will!

Still, it's worth noting again, for everyday users, just wait for the final releases, and to be really safe, waiting for the inevitable .0.1 or the .1 release will be what some people will choose to do.

More in this category: « Intel celebrates Intel Bridge tech used to run Android apps on Windows 11 Norton finds 'nearly half of young Australians who have been in a romantic relationship admit to ‘stalking’ an ex or current partner online' »
Share News tips for the iTWire Journalists? Your tip will be anonymous