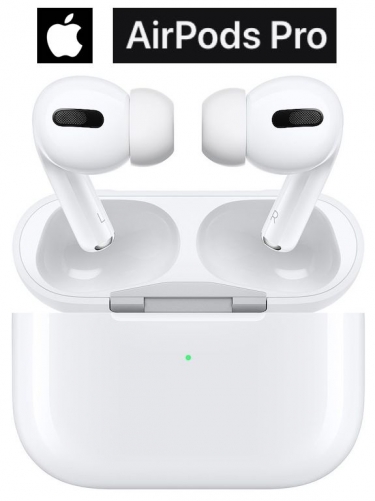 Apple's 1st-gen AirPods in 2016 offered "up to" 2 hours of talk time, with the 2nd-gen AirPods from 2019 extending this to 3 hours, but the new AirPods Pro take this to a welcome 3.5 hours on a single charge.

AirPods have always been magical devices. Connecting effortlessly to iPhones, iPod touches, iPads and Macs, and even able to connect to the Apple Watch and Apple TV, they have been wildly successful.

As with most Apple products, they were ridiculed by many online at first, but now you see them everywhere.

Go to your local Paddy's Market store in Sydney, or phone shops across the world, and you'll see a stack of outright clones that look like AirPods with the same kind of case. If AirPods weren't so popular, they wouldn't be so widely copied!

Some are more obviously clones, with flat bottoms on their charging cases so they can stand upright, but all save the Apple originals are fakes, with the cheaper ones having terrible sound quality for listening and when on calls, for those listening to you, compared to the genuine article.

You even see packaging that seems identical, even posters proclaiming how magical they are with the same branding of the original AirPods - these cloners certainly have no shame.

You can choose from twenty different levels of noise cancellation, with the WF-1000MX3 models having the same feature as the over the ears WH-1000MX3 headphones that allow you to let ambient noise in, with the mode called "Quick Attention" so you can speak to someone on the street, in a store, to the attendant on an airplane or elsewhere without needing to take the headphones off.

This is a feature that the new AirPods Pro also offers, called "Transparency Mode" which is extremely handy.

Anyone who already has a pair of the in-ear WF-1000MX3 earbuds is likely extremely happy with them, and they work perfectly well with Androids and iPhones, and in Australia, have an RRP of $399, the same as Apple's new AirPods Pro, although I've seen them online for as low as A$350.

iTWire colleague Stephen Withers has written up the news of the AirPods Pro launching in an article entitled "Apple adds active noise cancellation to AirPods Pro", while Apple's site has a page devoted to them here, in Apple's usual expertly marketed style, complete with promotional video made to extremely high standards.

Apple also points out that it has pressure equalisation capabilities as well as three sizes of silicone buds so you can get the best fit.

Stephen rightly noted that with active noise cancelling on, listening time drops to 4.5 hours, down from the standard "up to" 5 hours of listening time that all models of AirPods have promised.

But I don't see anyone online in the articles I've read thus far noticing the fact that AirPods Pro offers the longest talk time of any AirPods model yet, reaching "up to" 3.5 hours, which is thirty minutes more than the 2nd-gen AirPods from earlier this year, and 1.5 hours more than the original 1st-gen AirPods from late 2016.

Apple doesn't specify a talk time with active noise cancelling on or off, so it would seem 3.5 hours it is.

Of course, if you want truly wireless headphones with Apple's H1 processor with even longer listening and talk time, then Apple's Powerbeats Pro are up to the task, with a fantastic 9 of listening time and 6 hours of talk time, but while they offer a level of noise isolation, they don't offer the active noise cancellation that the new AirPods Pro now make available.

In the pure battery life stakes, the WF-1000MX3 earbuds offer longer listening and talk times, but unlike the AirPods Pro, don't offer any sweat resistance feature.

Apple has also redesigned its AirPods Pro with a shorter "stem", and unlike the first two generations of AirPods, there's no tap interface. Instead, you squeeze the stem once to answer and hang up on calls, squeeze twice to skip to the next track, squeeze thrice to go back a track, and long-squeeze to turn Transparency mode on or off. Naturally, you can just speak to Siri by voice saying Hey Siri - no need to press anything to get Siri's attention.

No doubt we'll start to see a cavalcade of clones to match the new AirPods Pro style, but again, only the real AirPods Pro from Apple will be the genuine article.

The case for the AirPods Pro seems extended because of the larger bulbous section that goes into your ear, but the dimensions of the case ultimate seem very similar - it's just a case of the AirPods Pro case being in a mode "landscape" orientation compared with the more "portrait" orientation of the 1st and 2nd-gen AirPods models/

So, it's great to see Apple extending talk time in the new AirPods Pro, even if they haven't been able to extend listening time as yet, while even lowering it by 30 minutes from the traditional 5 hours of listening time when active noise cancellation is enabled.

Apple has really popularised the concept of truly wireless headphones, evident by them being seen in so many ears on the street, and by the fact they are so shamelessly cloned out there.

You certainly don't see clones of other wireless earbud brands, while sites like Kickstarter and Indigogo seem to have campaigns offering yet another pair of wireless earbuds on a regular basis.

Apple is answering the Sony challenge with noise cancelling headphones all its own, at long last, and is sure to be even more successful with this latest model.