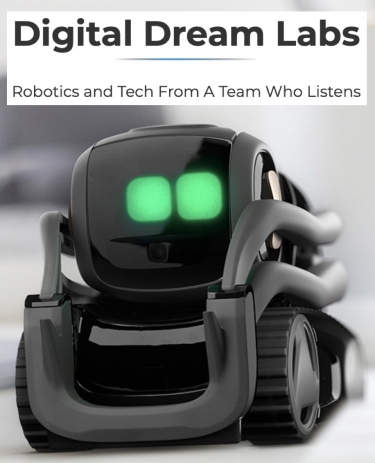 The company behind Cozmo, Vector and the Overdrive car racing game, Anki, went bankrupt, but its assets have been purchased by Digital Dream Labs, which intends to restore the entire platform and continue development.

When I first heard news in May 2019 that Anki, the company behind the Vector and Cozmo robots, and the Overdrive car racing game, was closing down, it was a sad day.

I've got an Anki Vector robot, and while he's no C3PO, R2-D2 or BB8, he's the beginning of such robots one day truly becoming real, and he's very mobile, kind of like a little mini-tank on wheels, with an expressive face, the ability to interact and answer questions, and even serve as an interface to Amazon Alexa.

There was a petition to save Anki, but until the news a couple of weeks ago (that I only just discovered) that Anki's assets were being purchased, all hope seemed lost.

Thankfully, a new hope has now emerged, with Digital Dream Labs CEO Jacob Hanchar announcing via an update to the original Kickstarter campaign that funded the creation of Vector to life that Anki was being saved.

Here what he had to say, in full:

"My name is Jacob Hanchar and I am the CEO of a Pittsburgh Ed-Tech company called Digital Dream Labs. I wanted to let you know that we have purchased Anki's assets and intend to restore the entire platform and continue to develop the robot we all know and love, Vector!

"The most important part of this update is to let you know we have taken over the cloud servers and are going to maintain them going forward. Therefore, if you were concerned about Vector 'dying' one day, you no longer have to worry!

"The next portion of this update is to let you know what we have planned next and we will be announcing a KickStarter under Digital Dream Labs in the next month or two. While we are still brainstorming we are thinking the Kickstarter will focus on two features we have seen as major needs in the Vector community:

"As a bonus, we will see about putting together an SDK so users can play with Vector's audio stream and system, which we have discovered is a major feature you guys love about this little guy!

"This is just the beginning and subject to change, but because you have shown such loyalty and got this project off the ground in the first place, I felt it was necessary to communicate these developments as soon as possible!

"If you'd like to learn more about us and what we're doing, we have a video that can be found here that describes us, our crowd-raising efforts and our vision for education and the future.

"Again thank you and the best is yet to come!

More in this category: « Huawei announces Australian rollout of EMUI 10 and Android 10 OS Sonos backtracks on forced obsolescence »
back to top