Amazon reimagines Echo, Echo Dots and Echo Show 10 'inside and out' 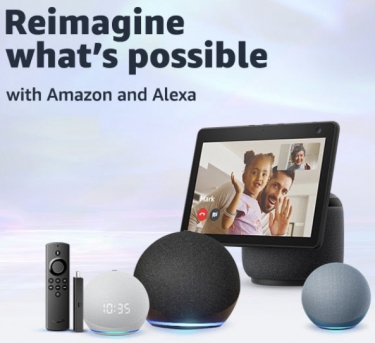 Just in time for the end of year holiday shopping season comes some great new upgrades to Amazon's line of voice controlled intelligent assistants, along with an all-new Echo Show 10 promising "a complete reimagination of Alexa with a screen", upgraded in "every way" and can even rotate silently to stay in view - and more!

Amazon has gone all out with its new 2020 Echo range in an attempt to stay ahead of the competition and up the ante with upgrades the company hopes you'll really want to buy!

My mother has been really enjoying her 2018 Echo Show 10 model, using it much more in preference to the Google Nest Hub Max, even though both have 10-inch screens, and she especially loves the Echo Show's access to Apple Music, which I have a family membership subscription to.

She's in her early mid-70s, and has never had the same kind of aptitude for technology I do, having been born into a world, at least in most of the first decade of her life, that had no electricity, no running water from taps, no fridges or washing machines and basically none of the mod-cons that we all take for granted today.

Of course, she has watched me learn about and live with computers since my father first bought me one in 1979 when I was four and a half years of age, and we've always had plenty of technology, but she has always lived a simpler life having been born in a much simpler time.

However, ever since the 2nd-gen Echo Show 10 came out, Mum has lived an Alexa life, and talks to Alexa as if she were a real person - even though Mum obviously knows Alexa is not. She loves to ask Alexa for the latest news every morning, which starts of with the fun fact of the fay, and which then plays a series of video and radio news reports as well as giving her the weather report that I've selected for her through the Amazon app on her iPhone, and she's always asking Alexa to "tell me more" about the various news headlines that it regularly displays throughout the day.

Mum does use an iPhone and an iPad too, but with Alexa being almost entirely voice driven (although she does tap and swipe the screen for various actions), she uses the Echo Show 10 much, much more as it is just so simple.

When Mum hears a word she's unsure about, or wants to know about something, she asks Alexa to explain it, and the whole thing is a really fun and easy voice controlled experience that she's effectively able to control effortlessly.

Alexa can tell funny jokes, sing songs, speak in funny voices, suggest funny things to ask, displays the time, the weather and plenty of interesting info, and  over the couple of years has become an integral part of Mum's life, which she absolutely loves.

Of course, there are questions she asks that are too difficult for Alexa to understand sometimes, but Alexa (and Google Assistant and Apple's Siri) are getting smarter all the time. Mum even likes to thank Alexa for her help on a regular basis, to which Alexa replies "No Worries!".

But now new Alexa-powered Echo devices are set to arrive later this year, and Amazon clearly expects to not only sell a lot of them to new customers, but for existing customers to upgrade older models too, as just about every tech company naturally expects.

“These are the best Echo devices we have ever made,” said Kate Burleigh, Country Manager for Alexa and Devices, Australia and New Zealand. “Echo and Echo Dot look beautiful and sound even better, and Echo Show 10 completely reimagines Alexa with a screen—simply move around and the display stays in view. It’s as natural as having a conversation. Plus, Alexa continues to get smarter—just ask to watch Netflix, make group calls, upgrade your smart home, and much more.”

Here Amazon tells us the next-generation Echo ($149) combines the best of Echo and Echo Plus into a single device.

"Its all-new design and fabric finish looks great in any space, with a bright LED light ring at the base of the sphere that reflects off of surfaces for added visibility. The new Echo also sounds significantly better; thanks to a 3.0-inch woofer, dual-firing tweeters, and Dolby processing that delivers stereo sound with clear highs, dynamic-mids, and deep bass.

"As with Echo Studio, the new Echo automatically senses the acoustics of your space and fine-tunes audio playback—just ask to listen to your favourite music and the rich, detailed sound will automatically adapt to your room.

"For the first time, Echo comes with a built-in smart home hub, with support for Zigbee, and Bluetooth Low Energy. With all of these new features and technologies, Echo is still just RRP $149 AUD". 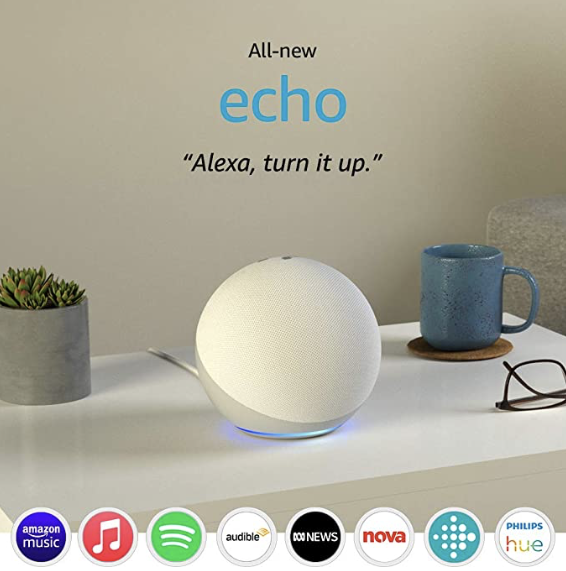 Then there's the "Echo Dot ($79) and Echo Dot with clock ($99)" which feature a "New Spherical Design and Crisp, Full Sound"

Amazon explains that "Customers have made Echo Dot our best-selling speaker—and it’s now even better. The all-new Echo Dot has the same spherical design and fabric finish as Echo, making it a stylish way to add Alexa to any space. It’s compact, but packs in a powerful 1.6-inch, front-firing speaker, producing crisp vocals and balanced bass for full sound you can enjoy in any room of your home. 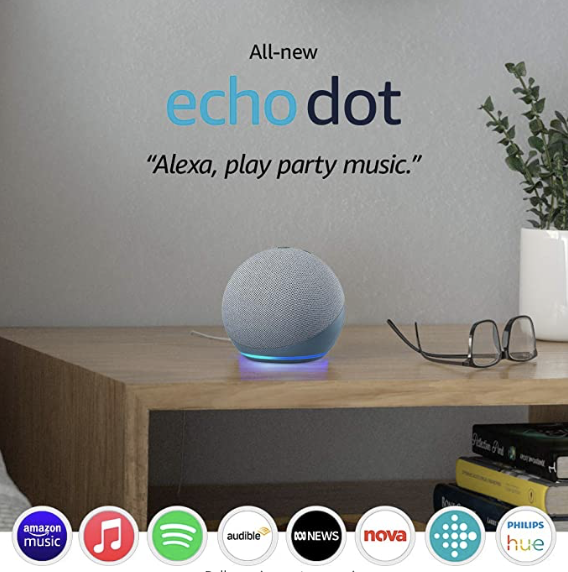 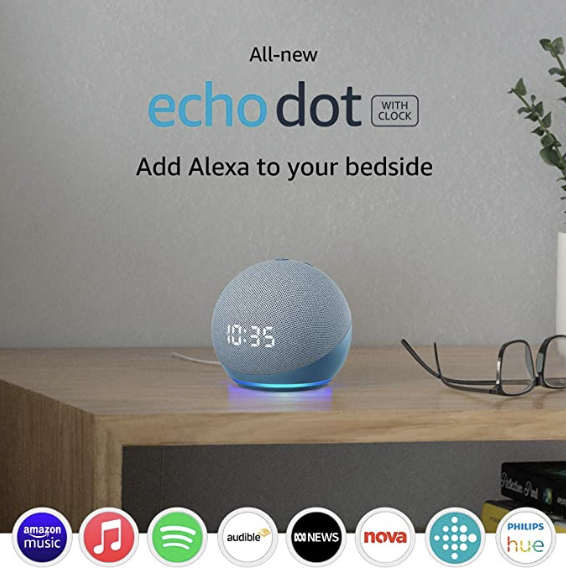 And what about the new Echo Show 10 that is "Designed to Move with You"?

This one's intriguing for sure!

Amazon says its "all-new Echo Show 10 - $399 is a complete reimagination of Alexa with a screen, and has been upgraded in every way. It features a brilliant 10-inch, adaptive HD display that automatically stays in view when you interact with Alexa—no matter where you are in the room. Plus, the new brushless motor is completely silent, meaning you won’t hear a thing as Echo Show 10 rotates.

"Ask Alexa to make a video call without worrying about being out of frame—as you move the screen does too, and the new 13-megapixel wide-angle camera pans and zooms to keep you at the center of the frame. Plus, with new Alexa Group Calling you can create a group of up to eight friends and family members, and simply say “Alexa, call my family.”

"As Echo Show 10 moves, so does its dual, front-firing tweeters and powerful woofer, providing premium, directional sound that automatically adapts to your space, making it great for all kinds of entertainment. Echo Show 10 will also rotate as you watch the news, flash briefings, or TV shows from ABC iview, or Prime Video. And, coming soon, you will be also able to watch Netflix simply by asking Alexa, with the ability to search, browse, and stream the entire catalog by voice".

Barry Smith, Partner Engagement Manager, Netflix said: "Improving our member experience includes making Netflix available where people want it. We’re excited to partner with Amazon on bringing the Netflix experience that people know and love to Echo Show, making it easier for our members to browse their favourite shows and films using their voice".

Continuing, Amazon explains that "Echo Show 10 uses advanced computer vision algorithms to help make your home smarter and more secure. You can also securely access a live feed on Echo Show 10 from another Echo Show device, or the Alexa app, with the ability to remotely zoom or pan the display and camera to see the entire room; or set up a Routine that automatically turns on the lights when someone enters the room. Plus, its built-in smart home hub capabilities include support for Zigbee, and Bluetooth Low Energy for devices that stay connected and work great inside and outside your home.

"As with all Alexa-enabled devices, Echo Show 10 is designed and built with privacy in mind. It uses a fusion of audio-based localisation and computer vision—all processed locally and securely on-device—to determine where you are and keep the screen facing you. Turn motion off at any time by sliding the built-in camera shutter closed, adjusting settings on-device or in the Alexa app, or just by saying “Alexa, turn off motion.” 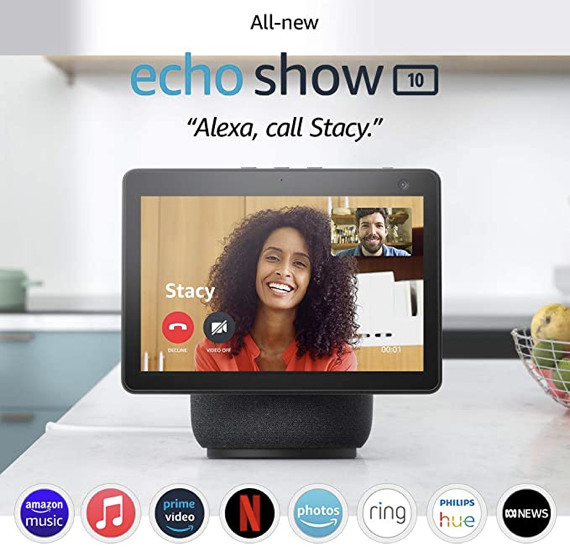 Amazon has also shared some findings from a survey the company recently conducted, and discovered:

Amazon also wants to be seen to be environmentally responsible, and states that "All Echo devices announced today are built with 100% post-consumer recycled fabric, 100% recycled die-cast aluminium, and post-consumer recycled plastic. Plus, all wood-fibre based materials used in Echo device packaging are made entirely from responsibly managed forests or recycled sources. In addition to using sustainable materials, these Echo devices also have a Low Power Mode to intelligently conserve energy during periods of inactivity, and deliver energy savings over the lifetime of the device".

More in this category: « Amazon Fire TV Stick Lite sticks it to TV competitors, aims to set TV world on fire New Huawei Watch Fit is now fit for sale at Australian retail »
Share News tips for the iTWire Journalists? Your tip will be anonymous