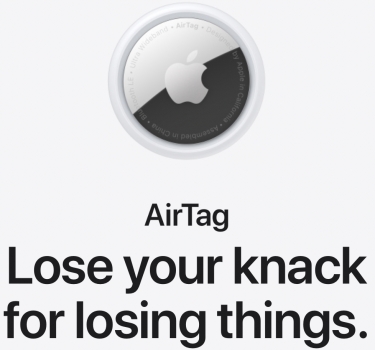 In what appears to be an overabundance of caution, Australian office supplies and technology retailer Officeworks has temporarily pulled Apple's AirTags from sale.

When I first heard about AirTags and read that they had a user-replaceable CR 2032 battery inside, I wondered how child-safe the battery compartment and removal process would be.

An Apple spokesperson said: "AirTag is designed to meet international child safety standards, including those in Australia, by requiring a two step push-and-turn mechanism to access the user-replaceable battery.

"We are following the regulations closely and are working to ensure that our products will meet or exceed new standards, including those for package labelling, well ahead of the timeline required.”

In researching for this article, I also found the AirTag manual online from Apple, which says:

"AirTag contains a coin cell battery. The battery may need to be replaced during the life of the product. Replace only with the same type (CR2032) and rating of battery, observing the correct polarity.

"To replace the battery:
1. Push the battery compartment door,then turn counter-clockwise with two thumbs and release when rotation stops.
2. Remove the door.
3. Remove the battery.
4. Insert a CR2032 battery into the device with the positive side (+) facing up.
5. Place the battery compartment door on the device, and rotate clockwise
while gently pushing, until it drops into place.
6. Push door into device until it stops, then rotate clockwise with two thumbs
until rotation stops.

The manual also states: "There is a risk of fire or electric shock, if the battery is replaced by an incorrect type.

"Important: Dispose of used battery according to your local environmental laws and guidelines. For more information please visit www.apple.com/batteries.

"Keep batteries away from children. Do not ingest battery, if ingested or placed inside body seek medical attention immediately. Ingesting can cause severe chemical burns in just two hours and result in serious injury or death. If the battery compartment does not close securely, stop using the device and keep away from children."

So, when Gizmodo reported that Officeworks had removed AirTags from sale due to safety concerns which apparently revolve around the battery, I was surprised.

The article quotes a Reddit thread where an Officeworks customer in South Australia was unable to buy AirTags, with Gizmodo's article quoting Officeworks stating it was waiting for ACCC advice before bringing the AirTags back on sale, although AirTags remain on sale at Apple, and at a range of other retailers in Australia just as JB Hi-Fi, the Good Guys, Bing Lee, Harvey Norman and elsewhere.

Upon receiving AirTags for review from Apple, I verified that you do indeed have to press down on the back of the Airtag's battery compartment and then turn that metal back before the compartment will open, which is similar to how a child-safe medicine bottle works.

The only other Apple device in recent memory to use a CR-2032 battery is the earlier aluminium Apple TV remote, which had a cover you had to unscrew using a coin in the slot.

It's clear that Apple's AirTag meets the second requirement, as I have verified myself.

Apple intends to update the product packaging and warnings for AirTag sold in Australia to comply with Australia’s new Information Standard well in advance of the 21 June 2022 compliance deadline.

According to Mashable, "The ACCC has not issued any recall notices for Apple's AirTags, but it did indicate that it is "aware of reports raising concerns about the accessibility of button batteries in the Apple AirTag product."

"If a supplier finds that a product they supply is unsafe, the ACCC expects the supplier to conduct a voluntary recall to advise consumers of the risk, address the safety issue, or remove the product from the market," said an ACCC spokesperson.

Finally, while AirTags can be dropped into the bottom of a bag, or pocket, AirTags are designed to be used in conjunction with an AirTag holder, which are on sale from Belkin from A$19.95, and from Apple itself from $45.

Compatible AirTag holders are also on sale at eBay and elsewhere online from around $7 when purchased in bulk.

If you have young children and are particularly worried, you could always apply stick tape to the back of the AirTag to further secure the compartment from being opened.

While it is obviously important to ensure that children do not swallow button batteries, given the serious danger such batteries represent to anyone, child or not, when swallowed (or placed in the nose or ear) as explained by the ACCC's Product Safety page, which the ACCC also wrote about in December 2020, it is yet to be seen what action the ACCC will take in regards to AirTags given they do comply with existing regulations.

It's also a clear reminder to parents that button batteries of any type must be kept away from children, with such batteries to be found in a range of devices.

So, if you have AirTags or any of the devices listed above, parental caution is as always, advised.

More in this category: « Swann launches new security camera Amazon's next-gen Echo Show 8 and 5 are alive with great new features at affordable prices »
Share News tips for the iTWire Journalists? Your tip will be anonymous