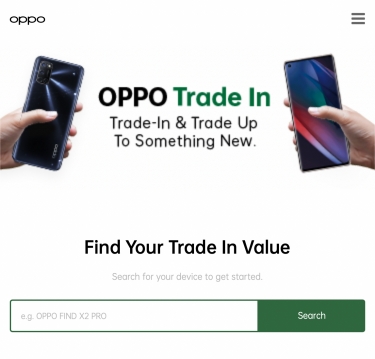 I've heard it said for many years that those in the trades make more money, with OPPO hoping you'll spark yourself into action to get a new OPPO with a more powerful chippie and much better specs, saving your eyes and your wallet even more with its new trade-in and trade up program.

Ok, so tradesperson jokes aside, of which I will no longer plumb the depths, I have heard for years that the trades is where the true shortages and money-making opportunities for young people are, rather than to all become developers or cyber security experts, although all three are indeed excellent professions to get into.

Now, OPPO's new trade-in program isn't the first such program in the industry - but it is for OPPO.

It's a sign of maturity in both operations and technology, and with OPPO's impressive new Find X3 Pro having just arrived at retail, and also online through Telstra, Optus, JB Hi-Fi and Harvey Norman, signifying its most advanced flagship launch yet, OPPO has found another way to make its entire current range more affordable and desirable against a sea of competitors, including Apple. Samsung, Nokia, Motorola, Realme, Xiaomi and plenty of others.

Of course, the Android world has plenty of examples of smartphones hitting various price points with technologies once only seen of the most expensive flagships as companies battle it out for the hearts, minds and wallets of consumers.

OPPO has devices at various price points, and as I'm sure I'd hear other Android makers claim, OPPO says it "has continuously strived to make premium devices accessible to all", and that it is "staying true to this ethos with the launch of a local trade in program."

This mean from today onwards, Aussies can now trade in and trade up through what OPPO says is its "new hassle-free online process."

The dedicated landing page lets you find OPPOs trade-in values for a range of OPPO, Samsung, Apple, Google, Huawei and others, to find the trade in value of their current device, and receive a voucher discount that can be applied to purchase a new OPPO smartphone.

OPPO Australia MD, Michael Tran, says he "believes there is great opportunity within the trade-in market as more Aussies look for quality devices at competitive price points", with OPPO pointing to Telsyte research showing that "sales of smartphones priced between $300 to $1,000 increased by 14% in 2020 compared to the previous year. In contrast, sales declined in both premium (above $1,000) and budget (below $300) segments."

Of course, the 256GB OPPO Find X3 Pro is $1699, but with a wide range of models including yesterday's launch of Australia's most affordable 5G devices with the A54 5G at $399 and the A74 5G at $449. among the Find, Reno and A-Series models covering all the price segments in its portfolio, OPPO continuously brings top-end features down the line each generation, as you'd expect.

Tran added: “At OPPO we’re continuously listening to our customers and analysing industry trends to ensure we’re delivering not only the products, but also the services that Aussies are demanding. With consumers becoming increasingly price-conscious but not wanting to compromise on quality, a trade in program that supports our wide range of smartphones was the logical next step for our growth in Australia."

Claiming it is "the third largest smartphone vendor in the country", OPPO also points to Telsyte's research stating OPPO has "over a million Australians using an OPPO smartphone at the end of 2020", and quotes Foad Fadaghi, Telsyte MD, saying: "OPPO’s new trade in program follows its steadfast growth in Australian users and highlights the importance of trade in programs for creating customer loyalty."

OPPO continues its pitch, stating: "For existing OPPO Customers with an Australian handset, the new trade up program promises value, with additional trade-in discounts being added to OPPO devices on top of the initial device valuation.

"This means users could trade in an OPPO Find X2 Pro (512GB) and receive an additional $205 OPPO loyalty valuation, on top of the $502 device trade in valuation, totalling up to a mammoth $707 voucher towards a new OPPO device.

"The OPPO Trade In program also accepts devices from other manufacturers including Samsung, Apple, Google and Huawei, making getting your hands on a new OPPO more accessible than ever before. With competitive trade up valuations, the new program would allow customers to trade in a Google Pixel 5 and receive up to a huge $470 credit towards a new OPPO device. Similarly a Huawei P30 Pro (256GB) trade-in could receive up to a $400 credit."

So, given the Find X3 Pro, Neo and Lite range are the new models OPPO presumably wants to sell the most of, the company is doing its best to reward new and existing loyal customers with a trade-in and trade up deal that works for both parties and promotes new OPPO owners while the older devices presumably go onto the refurb market.

So, and the company states, additional information and pricing valuations for different models can be found at OPPO’s Trade In page.

For those looking to upgrade their smartphone to one of OPPO’s comprehensive range of handsets, OPPO naturally says "the time is now."

You can see the Oppo Find X3 Pro launch here:

More in this category: « Qobuz LAUNCH VIDEO: The high-res music streaming and download platform has arrived in Australia Parallels Desktop 16.5 for Mac Supports Both M1 and Intel Chips, Windows 10 for ARM is super fast virtualised »
Share News tips for the iTWire Journalists? Your tip will be anonymous