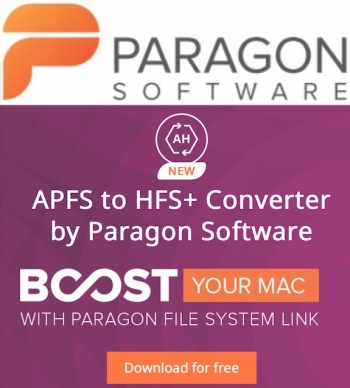 Instant reversion of APFS volumes on macOS back to HFS+ has been made possible by Paragon Software Group, the makers of NTFS for Mac and many other fine programs on Windows, Mac, Linux and Android.

If you're a Mac user who has wanted to read and write to Windows NTFS formatted drives, Paragon Software's Microsoft NTFS for Mac software has been a must-purchase app for many, many years.

Thankfully, the company continues being a paragon of programming excellence, and in the great Game of system software Thrones, its developers have been the true "Mother of Paragons" laying waste to pesky file system problems on all major platforms.

Indeed, I have NTFS for Mac on all my Macs, and I can effortlessly read and write to portable hard drives and USB sticks formatted on Windows PCs, which has been so extremely handy, I have been more than happy to bend the knee and pay the very affordable price for such file system synchronicity.

Now, it is true that Macs have always been able to read and write FAT32 formatted drives and USB sticks, but with most Windows drives formatted to NTFS, and with Mac only able to natively read NTFS but not write to it, presumably so Apple could avoid paying a license fee to Microsoft for the NTFS standard, Paragon's software has been paramount for absolutely hassle free drive-writing compatibility.

So, while many would know Paragon for its must-have Mac software, you might not know that it also has an excellent range of other apps that you should know about on macOS, from the Hard Disk Manager for Mac, CampTune that lets you redistribute space between Boot Camp and Mac volumes in Minutes, extFS for Mac that lets you read and write Linux ext2/3/4 fiesta on your Mac, the APFS Retrofit Kit for Mac OS that lest you read APFS-formatted drives on macOS 10.10 to 10.12, and now the new and free APFS to HFS+ converter.

The full list of Paragon's software can be seen here, while the specific list of programs for Windows is here, Linux and Android is here, and its range of free software is listed here.

However, let's get back to Paragon Software's APFS to HFS+ Converter.

It's a "free system utility to work around APFS limitations by reverting back to HFS+ for specific use cases".

"If you are facing APFS limitations, such as incompatibility with Time Machine backups or FileVault 2 drive encryption, inability to format Fusion drives, or other drawbacks, the free APFS to HFS+ Converter by Paragon Software easily resolves the problem, reformatting volumes back to the original HFS+."

However, as Paragon sagely advises, "to ensure maximum data safety, you can first create recovery media, boot your Mac from that volume, then convert the system volume".

Here's how it works:

You'll need macOS 10.12 or above, and sufficient disk space for conversion output (based on volume size).

As noted above Paragon Software also has a tool called "APFS for Windows" which it launched earlier this year, which is "a driver that enables Windows users to access APFS volumes on PCs".

With APFS for Windows by Paragon Software, PC users are able to instantly access and write to APFS-formatted hard disk drives, solid-state drives, or flash drives directly on Windows PCs.

APFS for Windows by Paragon Software is available for $49.95, can be used on up to three PCs, and comes with a free 10-day trial.

So, now you know where to go to solve the paradox of effortless cross-platform file system nirvana thanks to the paradigm shifters at Paragon Software!

More in this category: « Amazon Prime Day 2018 in Australia starts midday 16 July for 36 hours VIDEO: Microsoft launches Surface Go at A$599, smallest and most affordable yet »
Share News tips for the iTWire Journalists? Your tip will be anonymous