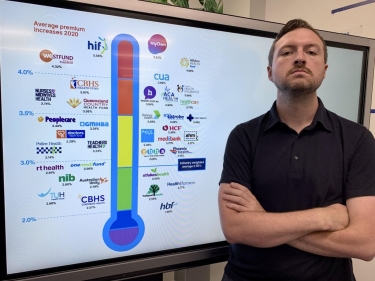 “With premiums set to rise again on April 1, time is running out to avoid health insurance rip-offs. You only have a couple of weeks to take action on your health insurance,” says CHOICE consumer advocate Jonathan Brown.

“Private health insurance has officially taken over energy as the most pressing household cost concern. Since the introduction of the new Gold, Silver and Bronze health tiers last year, CHOICE’s experts have been doing deep analysis and crunching the numbers to help cut through the confusion.”

Brown notes that CHOICE has released a 5 step action plan to help Australians before the April 1 price rises.

“The CHOICE Health Insurance Action Plan is about cutting through the crap. Some commercial comparison sites compare as few as seven health funds. As a non-profit, CHOICE wants to help you make the right decision for you and your loved one’s needs. That includes figuring out if you even need private health insurance,” Brown concludes.

Brown says that in 2019 CHOICE analysis found some Australians were paying an additional $1700 a year on some Silver Plus policies and the consumer advocate awarded Medibank a Shonky Award for ‘Basic’ cover that was more expensive than a number of ‘Bronze’ policies.

He says analysis was made possible by CHOICE’s team of expert analysts and non-profit and independent health insurance comparison tool.