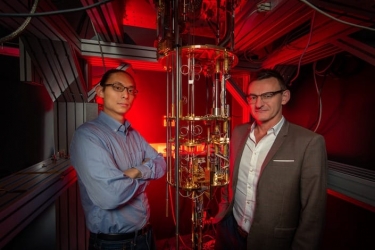 Researchers led by a University of New South Wales professor have achieved a proof-of-concept of a new approach to building quantum computers.

Most quantum computer designs only work at fractions of a degree above absolute zero, an environment that is very expensive to achieve and maintain.

Researchers led by Professor Andrew Dzurak at UNSW Sydney have developed a way of producing 'hot qubits' – quantum devices that operate at 1.5 Kelvin.

"This [1.5 Kelvin] is still very cold, but is a temperature that can be achieved using just a few thousand dollars' worth of refrigeration, rather than the millions of dollars needed to cool chips to 0.1 Kelvin," explains Dzurak.

"While difficult to appreciate using our everyday concepts of temperature, this increase is extreme in the quantum world."

In a paper published in the journal Nature, Dzurak's team and collaborators in Canada, Finland and Japan reported a proof-of-concept quantum processor unit cell that operates at this relatively warm temperature.

"Every qubit pair added to the system increases the total heat generated," explains Dzurak, "and added heat leads to errors. That's primarily why current designs need to be kept so close to absolute zero."

The UNSW team's approach is to initialise and 'read' the qubit pairs by using electrons tunnelling between the two quantum dots.

The proof-of-principle experiments were performed by UNSW's Henry Yang, who Dzurak describes as a "brilliant experimentalist".

The warmer – or should that be less cold? – operating temperature also makes it easier to integrate the quantum processor with conventional silicon chips.

More in this category: « Global PC demand up in 1Q, but shipments down due to supply chain issues New 'create' laptops from HP »
BACK TO HOME PAGE
back to top