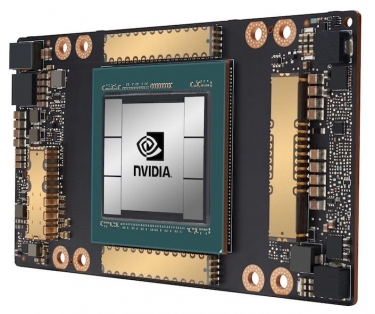 GPU maker Nvidia has made a slew of announcements at its GTC 2020 event, which was held online rather than in its usual conference format.

The Nvidia A100 is the first GPU based on Nvidia's Ampere architecture, and with more than 54 billion transistors is said to be the world's largest 7nm processor.

Featuring third generation Tensor cores with improved FP32 performance and FP64 support, it is designed to accelerate most workloads, including AI training and inference, analytics, scientific computing and cloud graphics.

Each A100 can be partitioned into as many as seven instances for inferencing tasks, while multiple A100s can be logically combined via the third-generation NVLink interconnect.

Various components of Nvidia's software stack – including the CUDA-X libraries and the newly-released Jarvis conversational AI framework – have been updated to support the A100.

A100-based servers are expected from manufacturers including Dell, HPE and Lenovo, and Nvidia is already shipping its DGX A100 system with eight A100 GPUs.

The DGX A100 is said to deliver 5 petaflops of AI performance, and the first customer to receive one was the Argonne National Laboratory.

"We're using America's most powerful supercomputers in the fight against COVID-19, running AI models and simulations on the latest technology available, like the Nvidia DGX A100," said Argonne associate laboratory director for computing, environment and life sciences Rick Stevens.

"The compute power of the new DGX A100 systems coming to Argonne will help researchers explore treatments and vaccines and study the spread of the virus, enabling scientists to do years' worth of AI-accelerated work in months or days."

AWS, Google, Microsoft, and other cloud providers are planning to offer A100-based services.

"The powerful trends of cloud computing and AI are driving a tectonic shift in data centre designs
so that what was once a sea of CPU-only servers is now GPU-accelerated computing," said Nvidia founder and CEO Jensen Huang.

"Nvidia A100 GPU is a 20x AI performance leap and an end-to-end machine learning accelerator — from data analytics to training to inference. For the first time, scale-up and scale-out workloads can be accelerated on one platform. NVIDIA A100 will simultaneously boost throughput and drive down the cost of data centres."

In related news, Oracle announced that the A100 GPU will be available in Oracle Gen 2 Cloud regions.

Customers will be able to use bare-metal configurations with eight A100 GPUs and 64 2.9GHz AMD Rome cores, or virtual machines with one, two or four GPUs.

"Oracle is enhancing what Nvidia GPUs can do in the cloud," said Oracle Cloud Infrastructure vice president of product management Vinay Kumar.

The EGX A100 is intended for larger commercial off-the-shelf servers, while the EGX Jetson
Xavier NX is designed for micro-edge servers.

The EGX A100 is based on the Ampere architecture and allows the processing of massive amounts of streaming data from cameras and other sensors.

The EGX Jetson Xavier NX is said to be the world's smallest, most powerful AI supercomputer for microservers and edge AIoT boxes, delivering the power of a Xavier SoC in a credit-card sized module that can deliver 21TOPS while drawing just 15W.

"The Jetson Xavier NX is the result of years of experience and leadership in edge computing, enabling customers to deploy real-world AI applications."

Huang said "The fusion of IoT and AI has launched the 'smart everything' revolution.

The EGX A100 won't be available until the end of 2020, but servers based on the EGX Jetson Xavier NX are available immediately.

On the software side, Nvidia made announcements relating to its Clara healthcare platform.

The Clara Parabricks computational genomics software set a speed record by analysing the entire human genome DNA sequence in under 20 minutes. Parabricks is available on a free 90-day licence to COVID-19 researchers.

New AI models developed jointly with the US National Institutes of Health can help researchers study the severity of COVID-19 from chest CT scans and develop new tools to better understand, measure and detect infections. 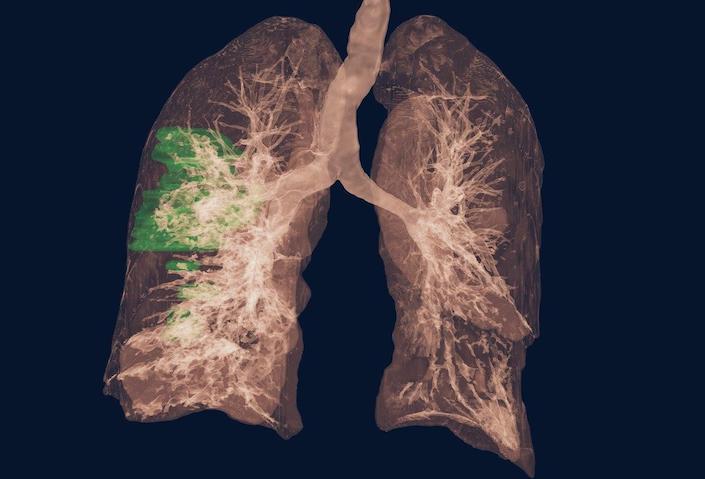 "Never before has there been such a critical need to apply the best AI technology and accelerated computing to every facet of healthcare, and its effects will be felt widely beyond this pandemic and across healthcare going forward," said Nvidia vice president of healthcare Kimberly Powell.

In addition, Nvidia announced a collaboration to bring end-to-end GPU acceleration to the Apache Spark 3.0 big data analytics system. This will allow the application of GPUs to ETL, AI model training, and analytics.

More in this category: « 13in MacBook Pro gets Magic Keyboard Dell drops a bundle of PCs »
BACK TO HOME PAGE
back to top