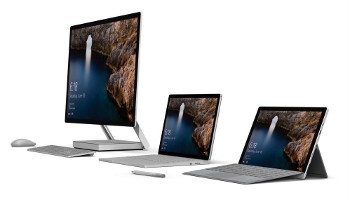 Microsoft says that November was its best month yet for Surface sales but offered no numbers to back up the claims.

In a blog post, Brian Hall, consumer vice-president for Microsoft Devices Marketing, also claimed that more people than ever before were switching from Macs to Surface devices but again provided no hard numbers to back his claim.

Hall said, "It seems like a new review recommending Surface over MacBook comes out daily. This makes our team so proud, because it means we’re doing good work."

But he could only find one such review to justify his claim.

Hall offered a link from PC Magazine to a story titled "Why I left Mac OS for a Surface Book" which initially could not be found. Later, when the site came up, the article was seen to be by one of the publication's writers who switched.

He said the Surface Book with Performance Base, essentially aimed at the MacBook Pro, was now available in Australia and New Zealand and would go on sale in Austria, China, France, Germany, Hong Kong, Japan, Switzerland and the UK early in the first quarter of 2017.

Regarding the Surface Hub, a device meant for collaboration in the workplace, Hall said that demand was exceeding expectations.

"By the end of 2016, nine months since our launch, we will have shipped Surface Hubs to over 2000 customers in 24 markets. The average deal size we see in the pipeline is approximately 50 units, but we’ve seen orders as large as 1500 units to a large car manufacturer."

More in this category: « HP Z2 Mini workstation for CAD and power users Crucial DDR4, 2666MT/s server memory – get some fast! »
Share News tips for the iTWire Journalists? Your tip will be anonymous