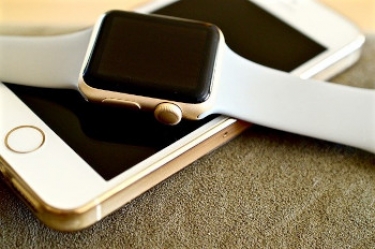 Image by ErikaWittlieb from Pixabay

Apple bucked the trend in global smartwatch shipments in the first quarter of 2021, increasing its shipments by 50% year-on-year, compared to a growth rate of 35% for the overall market, the technology analyst firm Counterpoint Research says.

Counterpoint's Global Smartwatch Model Tracker showed that Apple's newest Series 6 models were responsible for this performance, with the company seeing its market share climb by three points as a result.

Samsung's shipments increased by 27% year-on-year due to the popularity of the Galaxy Watch 3 and the Galaxy Watch Active series. However, this growth was below the overall market level and meant a small dip in its market share.

The other well-known brand to lose market share was Huawei, compared to a strong first quarter in 2020.

Counterpoint senior analyst Sujeong Lim commented: "Apple was able to further solidify its leadership position in the market by widening the portfolio from Watch SE to Series 6 at the right time. This may drive Samsung to launch a mid-price-tier model to boost growth.

“Huawei continued to face headwinds because of the declining smartwatch sales and how well Huawei watches are optimised for its smartphones. [It] will be interesting to see when Huawei launches its first watch based on Harmony OS, as it hinted at the Huawei Analyst Summit last month. This should kickstart a new ecosystem for developers to build experiences for the wrist. 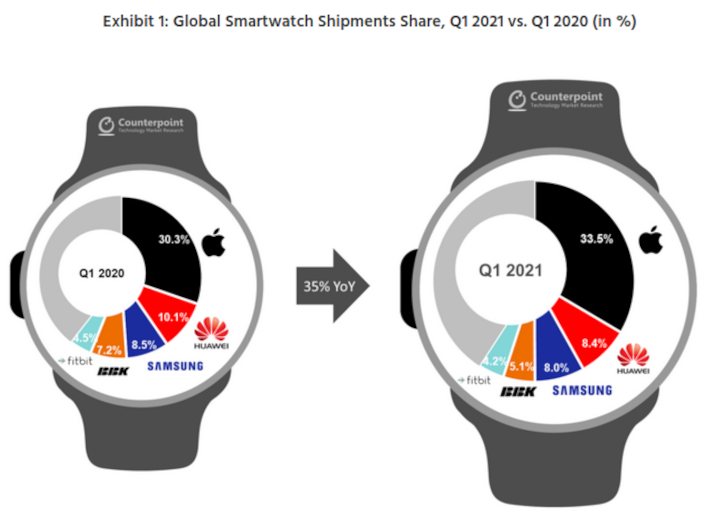 "But it will warrant a Harmony OS phone as well for the complete experience. Honor, spun off from Huawei, should open up new opportunities for players such as Google and Qualcomm.”

Looking at platforms, Counterpoint said Apple's WatchOS had taken over more than a third of the market. Google's Wear OS had not even come close, having at most 4% of the overall market, because most of the major brands had their own proprietary operating systems like Fitbit OS, Tizen and Garmin OS.

However, Google is expected to gain more traction following its partnership with Samsung announced at last week's Google I/O. Under this deal, Tizen OS will be integrated with Google Wear OS and go after the Android user base of 3.5 billion.

Lim said: “Hopefully, Google’s new Wear platform will be shipping in the next generation of the Galaxy Watch series in late fall. It will be good for the companies involved.

"The focus would be to not only improve performance, such as battery life, but also improve on the AI, newer apps and services, and integration with Android smartphones.

"Samsung will also be able to better target the broader Android smartphone user base. With the completion of the acquisition of Fitbit, Google should be able to enhance the Wear platform with ‘fitness’ capabilities and services integration, moving forward.”

Regarding the Google-Samsung announcement, Counterpoint's vice-president of Research, Neil Shah, said, “This is a great move by Google to accelerate its ambitions for the wearables space.

"It can build a robust portfolio of Wear devices integrating the best of all the three worlds – Tizen OS, Wear OS and Fitbit OS. The consolidation brings more power to Google’s Wear platform and will attract more developers to build newer experiences for the wrist.”

he said wearable devices and services would become important for companies such as Apple, Google, Facebook and Amazon as they expanded their reach in healthcare, pharmaceutical and insurance verticals directly or indirectly.

"This can include selling services such as Apple Fitness+, predictively cross-selling medicines and healthcare solutions, or attracting marketers to their ad platforms based on the health profiles built with the enormous amount of data generated via the number of sensors on these wearable devices," Shah added.

"Further, addition of advanced voice AI and ML capabilities on these devices will make wrist as one of the key segments technology companies will go after this decade before adding eyes/brain-based advanced wearable devices to the mix.”

More in this category: « NVIDIA bid to stop new GeForce cards ending up in mining setups NERSC's Perlmutter is 'world's fastest AI supercomputer': claim »
Share News tips for the iTWire Journalists? Your tip will be anonymous