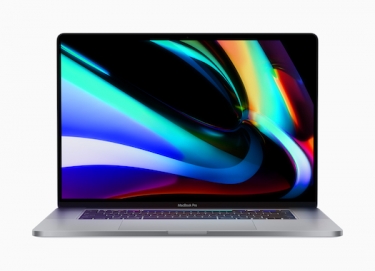 Global hardware and software maker - and one of the world’s most valuable companies - Apple, today announced its brand new 16” MacBook Pro notebook.

Apple describes it as the most powerful MacBook Pro ever, citing up to 80% faster performance over previous models, and say it is designed for “developers, photographers, filmmakers, scientists, music producers and anyone who relies on a Mac to create their life’s best work.”

The 16" size is new to Apple; previously a 17” MacBook Pro existed, though eventually dropped in favour of 15” and 13” models so the re-introduction of a larger screen is a welcome one for those willing to replace easy portability with increased display real estate.

“Our pro customers tell us they want their next MacBook Pro to have a larger display, blazing-fast performance, the biggest battery possible, the best notebook keyboard ever, awesome speakers and massive amounts of storage, and the 16-inch MacBook Pro delivers all of that and more,” said Tom Boger, Apple’s senior director of Mac and iPad Product Marketing. “With its brilliant 16-inch Retina display, 8-core processors, next-gen pro graphics, even better thermal design, new Magic Keyboard, six-speaker sound system, 100Wh battery, up to 8TB of storage and 64GB of fast memory, the 16-inch MacBook Pro is the world’s best pro notebook.”

Pricing begins at RRP $3,799 inc GST and it is available for order today.