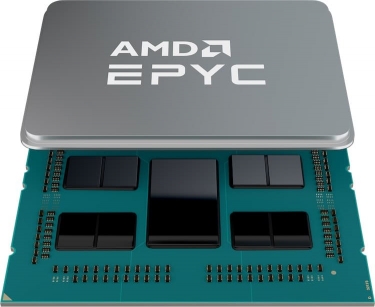 AMD's new Epyc 7003 series CPUs are built with Zen 3 cores, and the range includes the Epyc 7763 which the company says is the world's highest-performing server processor, based on internal testing.

The new AMD Epyc 7003 series is designed for HPC, cloud and enterprise workloads.

Available immediately, the Epyc 7003 series ranges from eight to 64 cores, and clock speeds from 2GHz to 3.7GHz.

In order to suit various workloads the 19 CPUs fall into three broad categories.

HPC applications are covered by CPUs that provide high performance per core, such as the eight core, 3.7GHz 72F3.

Cloud and high-end enterprise applications call for high core densities, as delivered by the 64-core 7713 and 7763.

Other models in the series provide a balance of core density and speed to suit enterprise workloads such as collaboration software and Java applications.

Epyc 7003 processors outperform Intel's offerings by a factor of at least two on floating-point, integer, and enterprise Java benchmarks, he added.

"That translates to real, tangible value for our customers."

The Epyc 7003 series' increased core density means that a system delivering a certain level of integer performance fits into three racks instead of the four required by Intel-based products. In addition to saving space in the data centre, AMD's approach consumes less power and reduces the four-year total cost of ownership by 35%.

Other features include microarchitecture improvements that yield a 19% performance improvement depending on the workload, up to 256MB of L3 cache with up to 32MB per core (compared with a maximum of 16MB for Zen 2 cores), and modern security features including Secure Encrypted Virtualization-Secure Nested Paging (SEV-SNP) to help prevent malicious hypervisor-based attacks.

A new version of VMware vSphere 7 is optimised for Epyc processors and takes advantage of their security features including SEV-SNP.

Epyc 7003 processors are drop-in replacements for the second-generation parts. The only other change needed is an updated BIOS.

Cloud providers AWS, Google, Microsoft Azure, Oracle Cloud Infrastructure and Tencent Cloud have all announced instances using Epyc 7003 CPUs, although some will not be available until later this year.

"With the launch of our third gen AMD Epyc processors, we are incredibly excited to deliver the fastest server CPU in the world. These processors extend our data centre leadership and help customers solve today's most complex IT challenges, while substantially growing our ecosystem," said AMD data centre and embedded solutions business group senior vice president and general manager Forrest Norrod.

"We not only double the performance over the competition in HPC, cloud and enterprise workloads with our newest server CPUs, but together with the AMD Instinct GPUs, we are breaking the exascale barrier in supercomputing and helping to tackle problems that have previously been beyond humanity's reach."