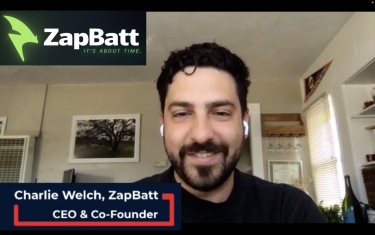 GUEST INTERVIEW: Imagine a rechargeable battery you can safely recharge to full in just 20 mins, with a 20 year battery cycle lifespan, with no thermal runaway fire problem, using AI smarts and which operates well beyond Li-Ion's range - and you have the battery of the future - which is now here!

Some of the very latest smartphones use high wattage chargers to fill batteries to full in less than 30 minutes, while even the latest iPhones can charge to 50% in half an hour when using a 20w charger, so we're seeing lithium-ion (Li-ion) slowly solving the fast charge issue, but it's far from a universal experience, with most batteries still taking hours to charge to full.

Li-ion batteries are also dangerous if damaged - if they're pierced, they can have a runaway thermal reaction that leads to batteries catching fire for hours, with this being a problem for crashed Tesla cars where fire departments need specialist training on how to put such battery fires out.

No-one has forgotten the Samsung Note 7 scandal either, which saw batteries spontaneously exploding in homes and in the air.

Then there's the problem of Li-ion batteries having relatively short charging cycles, from 500 recharges to 1500, after which the battery goes down to 80% of its life, and unable to maintain peak power delivery, a problem than anyone with an older smartphone has seen, let alone those iPhone users a few years ago that saw their devices lose power with 30% charge left - and which Apple was offering very inexpensive battery replacements for while throttling performance to avoid the issue causing phone power failures.

Now it's true to say that humanity has seen extraordinary advancements in technology. Processors have never been more powerful, today's screens are incredibly advanced and high-resolution, able to show billions of colours with high brightness.

Memory and storage has blossomed from kilobytes to terabytes, while modems have gone from 300bps to multi-gigabit 5G speeds.

It's not as if battery technology hasn't advanced in amazing ways too, especially given the demands on power that these advanced processors, screens, memory and more make of today's power sources, but the fundamental problems of lithium-ion remain.

So, it is absolutely fantastic to learn that technology that fixes all of Li-ion's problems has arrived, and it's called Lithium Titanate.

Lithium Titanate is known as LTO, and boy does this incredible battery chemistry have its advantages!

If you hammer a nail through the battery, it won't explode or catch fire, like a Li-ion battery would.

It is effectively the same weight as a regular battery, can be used in virtually any application that a Li-ion battery is used, with the only real disadvantage, if you want to call it that, being that currently, an LTO battery is double the price of a Li-ion equivalent.

However, with at least 10 times the usable life, is the battery really double the cost over its lifespan? Of course not. It ends up being much cheaper, much more reliable and safer to use, usable in temperates ranging from 55 degrees celius to minus 30 degrees celsius, which equates to 131F to minus 22F, which is much better than Li-ion, along with with charging times of just 20 minutes, making battery powered devices so much more available without needing extra battery packs, and LTO batteries are the game changers in battery tech we've been waiting for.

LTO batteries have been used in military applications for more than two decades, so the technology is proven, with the advancements of today being an AI system that can charge the battery very intelligently, while also intelligently discharging the battery as power requirements are needed, whether to deliver enough power to effortlessly climb hills or give enough grunt for a power tool to power through a power hungry task.

The first LTO batteries in consumer appliances are due at the end of 2022, and we should see plenty more technologies upgrading to LTO batteries over the course of the next few years.

ZapBatt's CEO and Co-founder, Charlie Welch, is an aerospace engineer with an impressive history in working with batteries for on planet, off planet and polar uses.

Welch has written a brilliant, must-read article at PowerMag, describing all of the above in much more detail. The ZapBatt website also has a great short introductory video, too.

The PowerMag article is headlined with LTO batteries for the micro mobility/e-scooter space, but naturally, they can be used anywhere Li-ion batteries are currently used, and personally, I'm truly excited for LTO batteries to be manufactured and arrive at scale.

We've all felt the pain of expensive battery packs that die in two or three years, phone batteries that do the same, and batteries which start expanding and going bad.

I look forward to never having to deal with these kinds of problems again!

To learn more about all of the above, and more, it was a real pleasure to speak with Charlie Welch to learn all about LTO batteries, the story behind ZapBatt and everything else!

That video interview is embedded directly below, after which is a summary of the questions I asked and the topics we spoke about, so please watch and read on!

So, please make sure to read the article Charlie Welch wrote for PowerMag, which goes into ZapBatt's LTO batteries into excellent detail, and please watch the video interview above!

More in this category: « VIDEO + INTERVIEW: TeamViewer showcases AR solutions for frontline workers during Australian F1 GP, celebrates 10 years in Australia Bonitasoft: BPM for the masses – and the most demanding »
Share News tips for the iTWire Journalists? Your tip will be anonymous