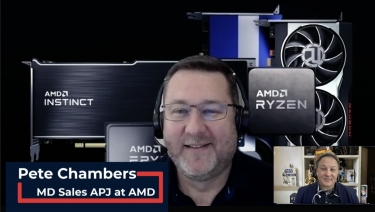 AMD's star has been rising ever since it launched its Ryzen and EPYC processors, with AMD bringing back much-needed competition to the computing space, making PCs great again and putting the super into supercomputing, and AMD's MD of Sales for the APJ region joined us on iTWireTV to talk about it all.

You can see the must-watch keynote at YouTube here, and I’ve also embedded the keynote video further down below, along with some other recent relevant videos.

AMD has been very busy before and since. The company's EPYC HPC processors accelerated the Perlmutter supercomputer, unveiled RDNA-2 based mobile graphics, delivered ultra enhanced FidelityFX super resolution for the latest games, and leads the high performance computing world towards exascale and beyond.

Gamers will especially love FidelityFX Super Resolution (FSR), an "open-source, cross-platform technology designed to boost framerates and deliver high-quality, high-resolution gaming experiences," with ,ore than 40 game developers announced support for FSR in their games and/or game engines, with a range of existing games adding support for FSR, and plenty more expected by the end of the year.

AMD has kicked Intel out of its slumber of the 2010s, and while Intel has done its best to roar back to life, and is even spending US $20 billion to build two fabs in Arizona to build its own next-gen processors, there's been plenty of rumours online that Intel has also turned to AMD's processor manufacturer, TSMC, in an attempt to compete.

Today, there are more design and OEM wins for AMD than ever before, and despite Apple also entering the race with its excellent M1 processor range that, AMD continues setting the pace and winning ever more customers in the consumer, business, enterprise, government, gaming and HPC supercomputing spaces, bringing much needed competition that sparks the hearts, minds and wallets of consumers into action.

So, when we were offered the opportunity to speak with AMD's local MD of Sales in the APJ region, Pete Chambers, we were glad to take AMD up on the offer!

My interview with Pete is below, followed by a summary of the topics we spoke about - please read on.

I started by introducing Pete and welcoming him to the program, and asked him to recap the highlights of AMD CEO Lisa Su's keynote at Computex 2021.

I then asked Peter to tell us his and AMD's message for data centre operators on AMD's latest-gen EPYC processors, followed by Pete's thoughts on the Pawsey Supercomputer using EPYC CPUs in Australia, and what this supercomputer is used for, along with other supercomputing activity in the region and globally with AMD's technology.

Pete explained the key benefits in specifying 3rd-gen EPYC over competing options and technologies, after which I asked Pete about the digital transformation and acceleration that has been seen due to the need to work from home because of the ongoing pandemic, which has seen a big jump in PC sales.

I naturally asked about the lessons learned by AMD from the pandemic, along with Pete's memories of his first computer, a bit about his own history in the world of tech, the current trends that are changing our tomorrows, great advice Pete has received in life to help him get where he is today, and his final message to both iTWire viewers and readers, and to AMD's current and future customers and partners.

So, please watch the video interview above!

Here are some other relevant recent AMD videos, starting with the Computex 2021 keynote:

The recap of the 3rd-gen EPYC launch video: