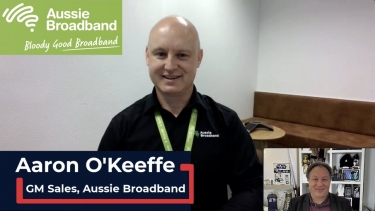 GUEST INTERVIEW: Putting the industry under immense competitive pressure, Aussie Broadband's Carbon has emerged as a true diamond, letting business customers have incredible control over Internet and mobile connectivity with true self-service, while also having full support as needed, with Aaron O'Keeffe on-hand to explain it all.

Aussie Broadband. In business for more than 16 years, the company is a multi-award-winning provider of Internet, network and voice services for consumers, businesses, enterprises and organisations of all types, large and small.

Aussie Broadband is famous for customer service, famous for caring, famous for competitive pricing, and famous for just giving more, especially to customers who are more technically inclined and want that extra control that self-service options deliver, while still offering top-class technical support for any customer that needs it.

Since going public on the ASX in late 2020, and with its own Aussie Fibre network nearly complete, the company has gone from strength to strength, and has become a major player in the market, taking it right up to its major competitors in a way that makes you wonder why anyone wouldn't use Aussie Broadband as their first choice.

Naturally, Aussie Broadband is always pushing the limits, and this includes the fiercely competitive business space too. Here, Aussie Broadband has launched its Carbon platform, which lets business customers "transform the way you do telco," and as the three videos on the Carbon page ably demonstrate, the Carbon platform does that and more - and since the videos were filmed, the platform has definitely been upgraded.

So, please watch the video interview with Aaron O'Keeffe above to learn more!

More in this category: « iTWireTV Interview: Sniip CEO Damien Vasta explains how eftpos and LCR help snip costs superbly iTWireTV Interview: Elker co-founders explain how to privately and securely share business problems and ideas with leaders for action »
Share News tips for the iTWire Journalists? Your tip will be anonymous