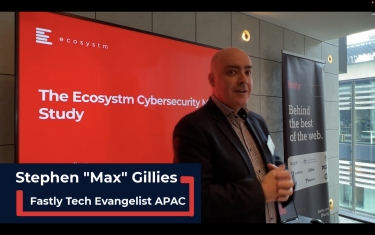 New research shows over half of businesses struggle to reduce the risk of attacks, leaving them fearful of compromise, particularly by nation-states and other types of threat actors. The study also predicts this situation will continue if critical cybersecurity skills shortages aren’t addressed, and if organisations do not employ detection technologies that are effective in production, provide real-time visibility, and integrate with existing tools and processes.

Fastly. A global edge cloud platform provider, the company started in 2011, landed in Australia with two points of presence in 2015, and in 2019, expanded its Australian footprint and opened local offices.

The pandemic then arrived in 2020, setting off the biggest boom in digital acceleration the world has ever seen. Fastly was well placed to copy, as it combines "the world’s fastest global edge cloud network with powerful software," helping its customers "develop, deliver, and secure modern distributed applications and compelling digital experiences."

On Monday, May 30 2022, Fastly released new research in partnership with Ecosystm that shows 75% of Australian businesses are now living with a vastly increased attack surface caused by their reliance on web-based applications. Large attack surfaces are routinely sought out and tested by attackers looking for less-protected entry points into corporate IT environments.

The detailed, 18 page Fastly/Ecosystm PDF white paper titled "How are Australian Companies Adapting to the New Threat Landscape?" can be freely download here (without needing to register first).

According to its survey, organisations in Australia moved en masse to more decentralised IT architectures over the past two years, but still struggle with some of the cybersecurity implications of these kinds of digital- and cloud-first operating models. Cloud, web applications and the APIs that enable these apps to integrate and exchange data rate highly in the risk and challenge assessments by CIOs, IT directors and technology leaders of Australian organisations. API endpoints, cloud service provider authentication, and enterprise open source software are all seen to pose considerable risks as potential entry points for attackers.

Inadequate controls around these architectural elements, coupled with a lack of operational maturity and reliance on traditional defensive postures, has Australian business leaders on edge and fearful of attacks. The survey shows that 65% of large enterprises in Australia rate nation state attacks as a very high or high risk to their organisations. There is also concern among leaders of all business sizes over credential stuffing, which attackers may use to try to compromise cloud accounts and individual as-a-service logins.

Here is the event in full, with Fastly executives including Derek Rast, Area Vice President A/NZ and Stephen "Max" Gillies, Technology Evangelist APAC, as well as Fastly customer Agathe Savard, a Security Leader & Strategist, as well as the Senior Director for Security and Risk at the Campaign Monitor Group, along with members of Australia's IT media at a lunch event, with the research findings presented by Andrew Milroy, Ecosystm's Principal Advisor, with plenty more information thereafter, so please read on!

The research also shows that:

That is because a typical response by decision-makers to the increasing complexity of their technology environments is to deploy additional new security solutions. But that approach means nearly half of Australian companies have more than 50 cybersecurity tools, and are battling alert fatigue and high false positive rates as a result.

Organisations need a modern cybersecurity posture that enables them to anticipate threats before they happen, and respond instantly when attacks occur. They need security controls that are capable of automatically sensing, detecting, reacting, and responding to access requests, authentication needs, and outside and inside threats. Administration and application of these controls should also be automated to a high degree to improve coverage and consistency, and reduce the burden on Security Operations Centres (SOCs) and cybersecurity practitioners.

“As Australian companies move deeper into digital transformations, they come up against a known problem: the challenges of securing a rapidly rising number of mission-critical cloud services and API-centric applications,” said Derek Rast, Area Vice President Australia and New Zealand at Fastly.

“The tools these companies use to secure their digital-first, cloud-first and microservices-based architectures need to evolve. Traditional web application and API security tools fall short in this regard. Leveraging Web Application Firewalls (WAFs) and Content Delivery Networks (CDNs) should be part of a holistic defence-in-depth security strategy.”

Cyber threat responsiveness is itself under threat

Illustrating perfectly the cyber maturity challenges faced by Australian companies is the lack of consistency in the operating parameters, powers and preparedness of cyber threat and incident response teams.

The research finds one in three cyber threat response teams lacks the support of key internal stakeholders, is unclear about escalation points for incident management, and doesn’t have the authority to confiscate or disconnect equipment and monitor suspicious activity, including from senior management.

In addition, when it comes to cyber threat response planning:

● 50% rehearse the plan at least once a year, the other half practice less frequently or don’t practice at all

● 48% have a timeframe for additions and improvements for the plan, and hold senior leaders responsible for making the improvements

Enterprises are more likely than large or medium-sized organisations to have a multi-stakeholder plan that is well-rehearsed. However, they’re also more likely to be subjected to regulated requirements for incident planning and response. This is supported in the study by compliance being identified as a major cybersecurity challenge facing organisations.

Enterprise still one step from the edge

Moving business logic from the backend to the edge not only increases application performance but can also substantially reduce an organisation’s risk, since user requests are funnelled through a single ‘front door’, instead of to any number of servers that host the application.

The study represents the views of 200 cybersecurity decision-makers - mostly CIOs, IT Directors and equivalent titles - in Australia. The study was commissioned by Fastly and conducted in April-May 2022. It covers organisations of three sizes: medium (101 to 499 staff), large (500 to 999) and enterprise (1000-plus staff).

The detailed, 18 page Fastly/Ecosystm PDF white paper titled "How are Australian Companies Adapting to the New Threat Landscape?" can be freely download here (without needing to register first).

More in this category: « Q&A with Ben Henshall talking about Denodo and ANZ region growth of the business iTWireTV Interview: Sniip CEO Damien Vasta explains how eftpos and LCR help snip costs superbly »
Share News tips for the iTWire Journalists? Your tip will be anonymous