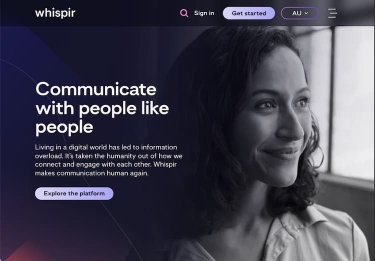 COMPANY NEWS: Whispir is on track for positive EBITDA in FY23, after delivering record full-year revenue of $70.6m, up 48%

Whispir (ASX:WSP), a leading global communications intelligence company that supplies a no code, Communications-as-a Service (CaaS) platform, is pleased to announce its financial results for the year ended 30 June 2022 (FY22).

● Strong balance sheet with cash of $26.1 million and no debt, well-funded through to profitability expected in FY23 and cash flow positive during FY24

Commenting on the company's FY22 performance, Whispir CEO Jeromy Wells said: "Whispir has again delivered a strong financial performance, with record revenues secured while reducing operating expenses in Q4. Our strengthened leadership team has contributed to Whispir's continued success as we set our sights firmly on becoming EBITDA positive in the second half of FY23.

"Over the period we secured a number of significant customer signings, including a strategic telco partnership that will accelerate growth in the Asian market and protect our customer base in the region.

"Governments, enterprises and other organisations are now clearly committed to a future where digitisation plays an essential role in ensuring communications are targeted, efficient and effective. The benefits of incorporating artificial intelligence, algorithms and data to inform how and when to communicate are becoming clear, and this realisation continues to drive our business in all markets. Put simply, it is becoming costly for organisations not to invest in intelligent communication services."

Whispir has exceeded earlier guidance to achieve full year revenue of $70.6 million, up 48% on the PCP, driven by expansion of platform use in the ANZ market. As anticipated, revenues were largely flat in Asia, which has been slower to bounce back from COVID-19 disruption, but a significant telco partnership is set to protect and increase Whispir's position in Asia in the future.

A three-year CAGR of 31.4% and 27.6% for revenue and ARR respectively demonstrates Whispir's strong market position and the significant demand for intelligent communications solutions. All revenue growth is organic reinforcing the Company's consistent revenue growth track record.

Gross margins remained relatively steady at 58.6% (PCP 59.8%), with the slight change reflecting the increase in transactional revenue (77% of total up from 68% PCP) due to various Australian state health departments' vaccine roll out programs in response to COVID-19.

Operating expenses (used in the calculation of EBITDA) of $52.0 million are on a downward trajectory reflecting the Group's cost efficiency program, which will continue into FY23, whilst remaining committed to the company's 5 year product road map. Q4 was down 11% on the previous quarter, and has an annualised run-rate of $48.7 million, the lowest for the year.

Whispir recorded EBITDA excluding share-based payments of $(10.6) million for the year, compared with $(3.8) million in the PCP, again outperforming the top end of earlier guidance.

The "land and expand" strategy is cementing Whispir's position in the market, with organic growth from our established customer base providing future revenue surety. Net revenue retention exceeded expectations at 125.5%. Meanwhile revenue churn, at 2.1% continues to be well under the Company's targeted threshold of 5%, further demonstrating that once adopted, customers find Whispir's benefits indispensable to their operations-and expand their use of the Whispir platform over time.

Overall, ANZ continues to be profitable, while the company continues to invest prudently to expand its footprint in Asia and North America.

ANZ revenue was up 56% to $62 million, reflecting the impact of government vaccine roll out programs.

There continues to be strong interest from government agencies in the capabilities offered by the Whispir platform. The launch by Victoria Police of public safety transport initiative STOPIT, which enables commuters to instantly report cases of unwanted behaviour on the public transport systems is an example of how Whispir's software is contributing to community safety.

Local councils have also adopted the Whispir platform as a way to improve engagement with citizens on everything from licence renewals and rates to community safety alerts and maintenance updates.

During the year, The Department of Education South Australia signed a 36-month contract with Whispir, enabling the department and 900 schools throughout the state to use the Whispir platform. The department leverages Whispir's omnichannel capabilities for internal communications and to contact schools, caregivers and other stakeholders for a broad range of use cases.

This contract recognises the superior value of Whispir's platform and ability to provide secure, cloud-based enterprise communications services to support the digitisation of critical operational use cases at a substantial future scale.

Asia reported revenues of $6.8 million for the year. Much of the focus in Asia in FY22 has been on signing and commencing a new strategic relationship with the major telco of the region. This relationship is expected to drive revenue growth in FY23 and beyond.

Whispir continues to make inroads in North America, with revenue up 38% to $1.8 million. Although this region is currently our smallest contributor to revenue, it remains the largest future market opportunity, and the investment in targeted digital marketing campaigns continues to build a strong sales pipeline of new opportunities.

Whispir enters FY23 in a strong financial position with cash of $26.1 million and no debt. The company expects to continue to deliver strong revenue growth in all regions, and to see improvement in gross margin as regions scale.

The promising outlook for further revenue growth, along with prudent management of operating expenses, gives us confidence we will deliver on previous guidance of becoming EBITDA positive during the second half of FY23, and that economies of scale will deliver cash flow break even during FY24.

Wells concluded: "With leading global brands and governments continuing to endorse Whispir's product, we are very confident about where Whispir is headed.

"We have a market- leading platform, a proven strategy of both onboarding new customers and increasing platform usage by existing customers, as well as an ambitious and dedicated leadership team that is ensuring we continue to drive growth while simultaneously improving efficiencies and managing expenses prudently.

"Low revenue churn combined with high net revenue retention reflects the appeal and multiple applications of the Whispir platform. We are motivated by our opportunities to scale in the year ahead and to becoming EBITDA positive in the second half of the current financial year."

Authorised by the Disclosure Committee.

Whispir is a global communications intelligence company that supplies a no code, Communications-as-a-Service (CaaS) platform enabling seamless omnichannel interactions between organisations, their systems and people to solve common challenges in terms of compliance, deliverability and engagement.

Whispir operates across three key regions of ANZ, Asia and North America and its platform is used across more than 60 countries. More information: www.whispir.com.

More in this category: « Somerville celebrates 40 years of innovation in Australia Lookout named a strong performer in 2022 Gartner Peer Insights Voice of the Customer for security service edge »
Share News tips for the iTWire Journalists? Your tip will be anonymous