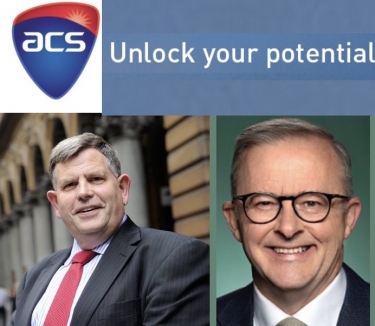 The Australian Computer Society (ACS) is the professional association for Australia's tech sector, and it has congratulated Anthony Albanese and the ALP on its success in winning the 2022 Federal Election.

The ACS hasn't said it, but I will - you can't spell Labor without Albo. Of course, we all hope the new government makes Australia a better place than it is today, so what does the ACS have to say when it comes to technology?

Here's its statement in full:

“Labor’s plans to build Australia’s advanced manufacturing sector will require a strong national investment in digital skills as well as incentives for business to invest in emerging technologies and we look forward to working with the government in achieving this.

“As Labor pointed out during the election campaign, Australia has fallen down the ranks of the World Intellectual Property Organisation’s Global Innovation Index, having fallen five places to 25th over the past three years.

“In our 2022 Election Platform, ACS outlined nine proposals to boost Australia’s technology sector and we would look forward to Labor implementing these and more, in order to address our decline in innovation rankings and boost the nation’s productivity.

“If we are going to ensure Australia’s future prosperity then we have to address that decline while ensuring the nation has the skills to take advantage of the 21st Century’s digital economy,” Dr Tate concluded.

The ACS 2022 Election Platform – Building Australia’s Digital Future – can be downloaded from the ACS website.

More in this category: « AWS and DTA renew whole-of-government agreement ACMA expects telcos to be proactive protecting their vulnerable consumers »
Share News tips for the iTWire Journalists? Your tip will be anonymous