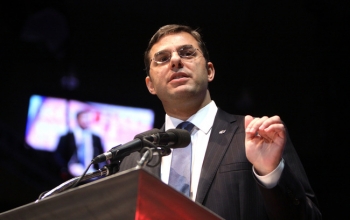 An amendment that would mean less Government surveillance of citizens has been narrowly defeated on the floor of the US House of Representatives.

The US Congress has voted to continue electronic surveillance of its citizens. A proposal by 33 year old libertarian Republican Justin Amash, in the form of an amendment to the Patriot Act, would have limited the ability of Government bodies like the NSA (National Security Agency) to monitor or demand the release of electronic communications records, by prohibiting the collection of metadata from telcos and Internet companies

The NSA’s activities have been thrown into high profile recently with revelations from whistleblower Ed Snowden that it and other US Government agencies have been engaged in large scale surveillance of emails and phone messages within the US and abroad, an activity given the code name PRISM.

Before the vote President Obama’s office issued a statement saying the amendment was a “blunt approach and not the product of an informed, open or deliberative process. We urge the House to reject the Amash amendment and instead move forward with an approach that appropriately takes into account the need for a reasoned review of what tools can best secure the nation.”

The amendment would “dismantle one of our Intelligence Community's counterterrorism tools,” said the statement. Congressman Amash, a Tea Party favourite from Michigan, immediately tweeted: “When's the last time a president put out an emergency statement against an amendment? The Washington elites fear liberty. They fear you.”

The 217-205 vote was not along party lines, with liberal Democrats and libertarian Republicans voting against the centre of both parties. Congressmen were subject to heavy lobbying from the White House and the Government’s vast security apparatus. The Republican caucus voted 94 to 140 in favour of the amendment, the Democrats 111 to 90. It was thus defeated largely by Republicans – the majority of the Democrat caucus voted in favour of the amendment and against the President. The two leaders of the House intelligence committee, Republican Mike Rogers and Democrat Dutch Ruppersberger, also urged their colleagues to vote against the amendment.

The US public is also ambivalent on the issue, with a June nationwide CBS poll finding 75% of Americans approve the Government collecting the phone records of people the government suspects of terrorist activity, but 58% of them disapprove of the collection of this type of data on ‘ordinary Americans’. Republican voters are more likely to disapprove than Democrat voters.

Republicans are more likely (42%) than Democrats (26%) to say the government has gone too far, most likely an effect of many on the right’s hatred of the Obama administration.

The defeat off the Amash amendment is hardly the end of the story. This has opened another major fault line in the US body politic.

It is likely to cause many more battles in the future, in Congress and elsewhere. Views on Ed Snowden’s actions are mixed, but there is no denying his effectiveness in publicising an issue which the military industrial complex would prefer was not in the public eye.

Representative Amash has vowed to continue to try to roll back the Government’s snooping. “We came close. If just 7 Reps had switched their votes, we would have succeeded. Thank YOU for making a difference. We fight on,” he tweeted after the vote.

The narrowness of the vote in Congress, and the passion of the debate, shows how much the issue of Government surveillance has divided the US. ‘The price of liberty is eternal vigilance”, said Thomas Jefferson. Is this what he meant?

Graeme Philipson sadly passed away in Jan 2021 and a much valued senior associate editor at iTWire. He was one of Australia’s longest serving and most experienced IT journalists. He is the author of the only definitive history of the Australian IT industry, ‘A Vision Splendid: The History of Australian Computing.’

He was in the high tech industry for more than 30 years, most of that time as a market researcher, analyst and journalist. He was founding editor of MIS magazine, and is a former editor of Computerworld Australia. He was a research director for Gartner Asia Pacific and research manager for the Yankee Group Australia. He was a long time weekly IT columnist in The Age and The Sydney Morning Herald, and is a recipient of the Kester Award for lifetime achievement in IT journalism.

Graeme will be sadly missed by the iTWire Family, Readers, Customers and PR firms.