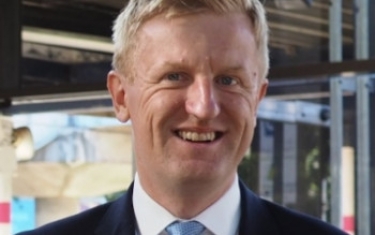 Oliver Dowden: "This project will see live 5G Open RAN within the UK in 2021, testing solutions to deploy 5G networks in the most cost-effective, innovative and secure way." Courtesy Oliver Dowden's website

The British Government says it will pump £1.6 million (A$2.9 million) into Japanese firm NEC to support a project to develop an open radio access network for 5G.

In an announcement on Monday, Culture Secretary Oliver Dowden said the investment was part of its commitment to try and diversify the suppliers in the 5G market which is dominated by three firms — China's Huawei, Sweden's Ericsson and Finland's Nokia  — at the moment.

The three companies together have about 80% market share, with Chinese firm ZTE Corporation (11%) and South Korea's Samsung Electronics (5%) the next biggest suppliers, Dowden said.

His announcement, titled "5G supply chain diversification strategy", comes as the UK was reported to have advanced the date for removal of all equipment made by Chinese telecommunications equipment vendor Huawei Technologies from its networks to September 2021.

Earlier, the government had said the cutoff date was the end of 2027.

Britain had announced in January that it would allow Huawei to supply up to 35% of gear for the non-core parts of 5G networks. Based on this decision, which was leaked in May 2019 well before it was officially announced, Vodafone, O2, EE (a BT unit) and Three all rolled out 5G networks, and used Huawei gear in non-core parts of the network. Spanish group Telefonica owns O2 and it has used Huawei’s infrastructure in some of its other networks. O2 has no wide use of Huawei in the UK, but has a network-sharing agreement with Vodafone.

Dowden did not specifically mention September 2021 as a new cutoff date on Monday, saying instead: "We have advised UK operators that they should stop procuring Huawei equipment affected by the US sanctions by 31 December and remove Huawei 5G equipment from the network by the end of 2027 at the absolute latest.

"We welcome the early steps operators have taken to follow this guidance, in advance of the powers coming into force to allow us to put this position on a clear statutory footing."

Sweden recently became the third country to say so publicly, but a court later suspended sections of a decision that had excluded Huawei from participating in Swedish spectrum bids. The spectrum auction itself was put on hold.

And, as iTWire reported on Monday, Germany, Japan and South Korea have now indicated that they would not issue a blanket ban on Huawei as demanded by Washington.

Dowden said: "Early progress in this space [Open RAN] is demonstrated by our commitment to work with NEC — one of the leading suppliers of Open RAN equipment — to implement and demonstrate the performance of a ‘neutral host’ Open RAN solution across a range of deployment environments.

"This project builds on NEC’s recent strategic investments to establish both a Global Open RAN Centre of Excellence and 5G Radio R&D Centre in the UK."

He said the UK would set up a SmartRAN Open Network Interoperability Centre, that would "create a platform for existing and emerging suppliers to come together to test and demonstrate interoperable solutions".

Dowden said the NEC project would test and demonstrate a neutral host solution, and also the role of a new service provider in the ecosystem whose role was to deploy and operate the solution.

"This project will see live 5G Open RAN within the UK in 2021, testing solutions to deploy 5G networks in the most cost-effective, innovative and secure way," he said.

"This project is backed by a UK Government investment of £1.6 million and forms part of the 5G Testbeds and Trials Program. The £200 million program has to date launched over 25 projects to accelerate the deployment of 5G networks in the UK and will now continue with a focus on attracting new suppliers into the UK market."

More in this category: « Germany, Japan and South Korea defy US over Huawei ban: report Govt ramps up online powers for AFP, ACIC in new surveillance bill »
Share News tips for the iTWire Journalists? Your tip will be anonymous