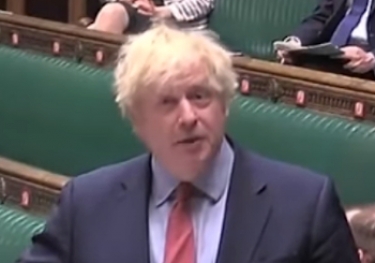 Boris Johnson has changed tack on the use of Huawei equipment. Courtesy YouTube

Ahead of a visit to the US in June, British Prime Minister Boris Johnson has decided to reduce the involvement of Chinese telecommunications equipment vendor Huawei Technologies in the country's 5G network to zero by the end of 2023, a report claims.

The Telegraph said Johnson's instructions to officials to draft plans for this scenario had come about due to the coronavirus pandemic.

In January, the UK announced that it would give Huawei a limited role in the country's 5G networks, giving the company a chance to bid for supplying up to 35% of equipment for non-core parts of the network.

The Telegraph said Johnson's decision was taken due to a growing backlash among his party's MPs against Chinese investment in Britain after the COVID-19 outbreak.

The decision to give Huawei a limited role was expected after the government of the previous prime minister, Theresa May, decided to allow Huawei to supply equipment for non-core parts of the network in April 2019.

That decision was not announced publicly, but leaked to one newspaper. Three telcos have already rolled out 5G networks, and all have used Huawei gear in the non-core parts of the network in keeping with the interim decision.

But China's actions during the pandemic appear to have sparked a rethink in the UK about Huawei's involvement in its 5G networks.

Additionally, there has been no let-up in pressure from the US for London to fall in line and block Huawei altogether.

Johnson's trip to the US is to participate in the G7 summit and he is expected to hold trade talks with the US.

More in this category: « How much will it cost the US to block TSMC from selling to Huawei? Pacific countries get more Australian TV content with PacificAus TV initiative »
back to top