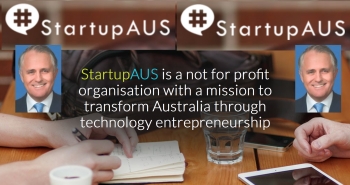 StartupAUS has welcomed the ‘substantial suite of innovation policies’ announced today by Prime Minister Malcolm Turnbull, (iTWire story here) saying this is ‘the first big step down a very important road to modernise startup rates across the nation.’

StartupAUS says that, in its innovation statement, ‘the Turnbull Government has outlined a series of policies across the innovation spectrum to help boost startup and entrepreneurial activity in Australia.’

The organisation says ‘this will begin the process of transforming Australia’s economy into one in which innovation is encouraged to flourish.'

Commenting on the announcement, CEO of StartupAUS, Peter Bradd, said: “It’s fantastic to have this at the top of the political agenda. Both sides of politics are now recognising the critical importance of innovation to Australia's economy - and the vast opportunities we can harness if we are smart and act quickly.

“The innovation statement announced today is a great start, and shows clearly the government is intent on real action rather than just rhetoric. We are particularly pleased to see policies aimed at boosting capital and talent available to startups.

“Some of these policies, such as tax incentives for angel investors, have been central parts of StartupAUS’ policy platform for some time. We expect this scheme to substantially boost seed capital available to startups.

“We’ve also been calling for the introduction of entrepreneurship visas, which will significantly boost the talent available in Australia. It’s a credit to the government that it has listened to the needs of its stakeholders on this topic.

“Startups have had a strong and consistent voice in this process - and the result is that we are now seeing innovative, effective measures to boost jobs and growth.

“Transforming Australia’s economy to take advantage of emerging technology is no easy process. Malcolm Turnbull’s government has moved very quickly on these issues, and these policies establish a strong initial platform for growth.

“We’ve got a budget and an election next year, so we're going to focus on consolidating these gains and setting ourselves up for the big strides we still need to take in order to start to catch our international competitors.

In April, StartupAUS notes that it ‘released its annual, action-oriented Crossroads Report that set out structured, world-class recommendations to help ensure Australia becomes a leading modern economy in the years to come.’

The organisation boats that ‘this document has been essential in shifting the political debate towards the policy settings outlined in the Prime Minister’s innovation statement.’

Bradd continued: “At the top of StartupAUS’ list of recommendations was the creation of a national innovation agency and today the Turnbull Government has announced that Innovate Australia will become Innovation and Science Australia, with Co-Chairman of CHAMP's Board of Directors and Investment Committee, Bill Ferris, and Australia’s newly appointed Chief Scientist, Alan Finkle, to head what is to be the Nation Innovation Agency.

“Not only has this been something StartupAUS has championed for some time, it demonstrates real commitment for the development of a comprehensive national innovation and entrepreneurship policy, and for oversight and delivery of programs under this policy.

“We also applaud Mr Turnbull’s commitment to elevating innovation and science to the heart of the government with the creating of a special cabinet committee to coordinate all research and science spending across government, set to reach A$10bn a year by 2020.

“Right now we are looking at ways to measure where we need to be by 2020 in terms of startup density, growth factors, and sector value (exits and valuations). We need to set some goalposts. What’s clear is that we still need to do a lot of work to even get close - today’s announcement will set a great platform for that,” Bradd concluded.

Salesforce, a partner of StartupAUS and a supporter of the Australian startup ecosystem, also welcomed the new initiatives.

Salesforce Regional VP of Innovation and Digital Transformation, Robert Wickham, said: "The statement is a first step in breaking down a number of long standing barriers to entrepreneurship in Australia and importantly, provides practical solutions to some major pain points.

“The focus on forging deeper engagements between research, universities, startups and businesses is particularly encouraging because this collaboration will create an open innovation culture that has so far been missing in Australia.

“The industry now needs to help bridge the gap between great ideas and commercialisation, and spur on the creation of home grown innovation crucial to a prosperous 21st century economy," Wickham concluded.