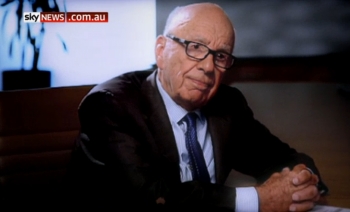 Media demi-god and conservative tabloid dictator Rupert Murdoch has slammed the National Broadband Network, describing it as a "ridiculous" idea.

Murdoch said the high speed broadband network, which continues under the new Abbott government as a slower mixed-technology rollout, was "ridiculous."

"The NBN was a ridiculous idea, and still is," he told The Australian's editor-at-large Paul Kelly.

“People think I’m talking from my pocket and Foxtel,” he said, referring to the pay TV operator half-owned by News Corporation.

“In fact, NBN would be great for Foxtel because it would take all those programs into every home.”

Murdoch said he was worried mobile technology has overtaken the need for the NBN, saying "we probably have the best mobile telephone system in the world."

The News Corp Executive Chairman, who Clive Palmer said "wants to control what you think", defended The Australian's fierce stand against the Labor Rudd and Gillard governments, saying it was "absolutely right," and declared it was still too early to pass judgment on the Abbott government.

He has met Prime Minister Tony Abbott three or four times and described him as an "admirable, honest and principled man."

The businessman also discussed man-made climate change, saying it deserves to be treated with "much scepticism."

"If the sea level rises six inches, that's a big deal in the world, the Maldives might disappear or something, but OK, we can't mitigate that, we can't stop it, we have to stop building vast houses on seashores," he said.

"The world has been changing for thousands and thousands of years," he added, saying that, if the temperature rises three degrees in 100 years, then "at the very most, one of those would be man-made."

More in this category: « NBN's $3 million man exceeds lowered expectations Google forms council on ‘right to be forgotten’ »
Share News tips for the iTWire Journalists? Your tip will be anonymous