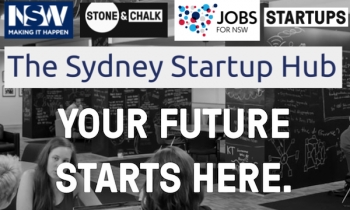 The NSW Government-funded Sydney Startup Hub will see the relocation of the top Stone & Chalk fintech hub by November 2017, with other startup bodies welcoming the news.

Dubbed the “first incubator of its kind in the Southern Hemisphere”, the Sydney Startup Hub will be home to Stone & Chalk, celebrated as “one of the top fintech hubs globally” (according to Deloitte's Global Fintech Hub Review 2017 – 116-page PDF report) with 24 Australian, and International corporate partners.

Stone & Chalk proudly boasts that its “residents have attracted over AU$180 million of direct equity investment, and have created 500 direct new jobs in the areas of fintech, cyber security, insurtech, data science, and connected devices".

The organisation also notes that “the new space at the Sydney Startup Hub will enable an influx of new startup residents to benefit from its innovation programmes, and will also strengthen the connections between new technology, and corporate partners,” and says “the move will enable it to significantly expand its operations, helping an additional 250 high-potential entrepreneurs access its suite of world-class programs, and innovation marketplace.”

Expressions of interest from start-ups, and scale-ups who wish to apply to the Stone & Chalk community can visit its website here.

The website for the Sydney Startup Hub itself is here.

Once relocated into its new Sydney home, Stone & Chalk will span “two floors in the new development alongside co-tenants such as Fishburners, Tank Stream Labs, and The Studio”, and will “house up to 600 residents across 4,252sqm of secure labs, co-working, meeting, and collaboration space – an increase in residential capacity of over 70% compared to its current space".

Naturally, Stone & Chalk is excited, claiming this will cement it “as one of the largest fintech hubs in the world".

Alex Scandurra, Stone & Chalk chief executive, said “This is a monumental milestone for Stone & Chalk, and more broadly for the Australian fintech scene.

“Affordable space remains the single largest barrier to build sustainable start-up ecosystems. Jobs for NSW have done an incredible job of bringing the entire community together, right in the heart of the CBD in an amazing, high tech space.

“Having reached capacity in 2016, the move to the Sydney Startup Hub will enable us to continue to support some of Australia's top scaleups, and help the fintech sector contribute to more growth across the country."

NSW Deputy Premier and Minister for Small Business, John Barilaro found a clever pun to celebrate the news, stating: “We are leaving no stone unturned.

“In addition to the 2500 residents, the incubator will welcome regional entrepreneurs from the wider start-up ecosystem through the regional landing pad, and community and events space.”

“We’ve been with Stone & Chalk since August 2015. Their programmes and support have been invaluable in helping us commercially launch, and accelerate our growth. This is something that previously, start-ups like ours would have needed to go abroad to do. The new space will allow others to rapidly scale like we did.”

Dean McEvoy, chief executive, Tech Sydney said: "It’s great to see the NSW Government listening to the start-up industry around the importance of building density. This significant investment behind the creation of the Sydney Startup Hub is one of the greatest contributions government could make to fostering a strong startup ecosystem. There is clear evidence within Australia and overseas around the multiplier effect this investment can have on economic outcomes and jobs growth.

"A global Harvard review around digital technology performance, released this week, shows that whilst Australia enjoys a high state of digital advancement we are in the ’stall out’ category and now showing signs of slowing momentum. The creation of more high density innovation hubs are crucial to getting our digital technology performance where it should be within the state and more broadly across Australia.

"The Sydney Startup Hub will help us to attract and support startup talent and will also provide a central space where visiting experts can focus their time. In this fast moving industry the knowledge of how to successfully build a high growth technology company has a very short shelf life, so the only way you can accelerate the learning of these founders is to put them close to other founders at a similar stage. This will be a place where the smartest and the brightest can learn from each other.

"We are keen to see the Sydney Startup Hub open quickly, particularly given there have been a number of stalled attempts to create this sort of space in the past. Sydney has some great community spaces for startups - but they are currently overflowing,” McEvoy concluded.

Alex Gruszka, head of Data and Insights, StartupAUS, said: "This is a bold and exciting initiative from Jobs For NSW. StartupAUS has consistently called for innovation districts as a key component in any startup ecosystem, and the Sydney Startup Hub represents the biggest investment toward that goal in NSW history. Now the work is ahead of us to make sure it's thriving with activity from Aussie start-ups.”

More in this category: « Protest against move to get rid of net neutrality law Australian laws aim to force decryption to fight crime »
back to top