Napthine to tackle bullies with some help from Zuckerberg 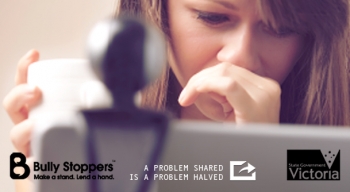 The Victorian government has launched a new Speak Up Against Cyberbullying campaign in partnership with Facebook, along with $400,000 in 'Bully Stoppers' grants for 54 schools to run anti-bullying programs.

Facebook and the Victorian Coalition Government are teaming up with Facebook to launch a new advertising campaign encouraging teenagers and parents to Speak Up Against Cyberbullying.

Dr Napthine said The Bully Stoppers: Speak Up Against Cyberbullying campaign is about empowering young people to speak up if they’re being bullied online and helping parents and teachers to identify the signs of those at risk.

“Cyber bullying may not be as obvious as other forms of bullying, but it can inflict just as much damage,” Dr Napthine said.

“As many as one in five young Victorians experience cyber bullying each year, but many young people don’t know how to seek help.”

“That’s why we are providing young people, their teachers and parents with tools to deal with all forms of bullying at home, at school and in the community.”

Dixon said schools were also key partners in the campaign, with 54 government and non-government schools sharing in $400,000 in new Bully Stoppers grants.

“We’ve had fantastic feedback following the first two rounds of grants, with thousands of students getting behind the Bully Stoppers: Make a Stand, Lend a Hand message,” Dixon said.

“Many of the schools in this third round of grants will run programs to tackle cyber bullying, or focus on peer mediation and bystander intervention – two of the key pillars of the Bully Stoppers campaign.”

As a campaign partner, Facebook is helping to share information on dealing with cyber bullying with young people and to connect parents with advice and support.

“Facebook has a strong commitment to the safety and wellbeing of young Australians and has a long standing relationship with the Department of Education and Early Childhood Development to promote online safety,” Facebook’s Head of Policy Australia and New Zealand Mia Garlick said.

More in this category: « Data retention: why doesn't Brandis just ask the NSA? Australia finally getting the privacy debate it deserves »
Share News tips for the iTWire Journalists? Your tip will be anonymous