ISPs willing to walk the plank with Abbott, Brandis Featured 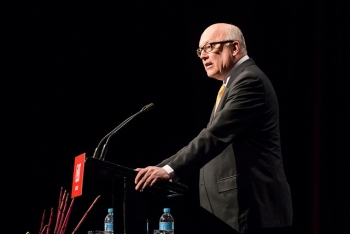 Australia's ISPs are willing to support the Government's move to tighten piracy laws, but they have urged caution.

But they have warned of ‘unintended consequences’ that will affect innocent Internet users and argued that any measure should include the encouraging of copyright holders to make their content more easily available and more affordable.

Their views are contained in a submission from industry body Communications Alliance. The full submission is available here, and an edited version of its executive summary is contained below. It says ISPs are willing to discuss the Government's tough anti-piracy proposals, including punishing Internet users who have received three warnings for downloading illegal content.

The companies said they are willing to negotiate a so-called ‘graduated response’ or ‘three strikes’ scheme, but are opposed to threatening customers with slower speeds or terminated services as rights holder Village Roadshow has suggested. But they also argue that it is should not be  their responsibility to impose sanctions or initiate court action against those pirating content.

Village Roadshow attempts to place piracy in the same league as much worse crimes:

“Just as there is no place on the internet for terrorism or paedophilia, there should be no place for theft that will impact the livelihoods of the 900,000 people whose security is protected by legitimate copyright,” it argued in its submission, quoting the inflated figure the industry has been using as the number of Australians employed in the copyright industry.

The key issue is who should bear the cost - and ultimate responsibility - for combatting piracy. Rights holders says it should be ISPs, while the ISPs say it should be the rights holders, because they are the ones who benefit.

Previous proposals have suggested rights holders could seek a court order requiring ISPs to block overseas-based websites, like the Pirate Bay, that host pirated content, whereas the Government in its discussion paper seems to be targeting ISPs.

Consumer group Choice argued this would lead to an “industry-run Internet filter,” while the Communications Alliance said in its submission that site blocking carries a high risk of “collateral damage”, where legal sites could also get caught by the filter.

“The bottom line is that consumer rights should be protected and that law-abiding Internet users should not have to pay the cost of doing Hollywood’s police work for it,” said Communications Alliance chief executive John Stanton.

Choice said the Government should look more closely into the pricing for digital goods in Australia compared to overseas in an effort to stop price gouging, adding Australian copyright law should also be amended to clarify that consumer circumventing of geo-blocking to access sites such as Netflix is legal.

One of the Government's proposals would force ISPs to send out warning letters to alleged file-sharers, while other legislation will mean sites such as The Pirate Bay, which facilitate illegal downloading, would be blocked by local Internet service providers, who in the past have fought in court against such a move.

The Government has promised to make ‘significant’’ changes to Australia’s copyright laws as a first-term commitment, though Attorney-General George Brandis has said that he may implement a ‘voluntary’ industry code of practice.

Previously some ISPs, most notably iiNet, have in the past vehemently fought any move to force them to regulate what users download. But Brandis has argued that ISPs “need to take some responsibility” for illegal downloading, because they “provide the facility which enables this to happen.”

Australia is consistently ranked as one of the 'worst' downloaders, with more users from Australia downloading Game of Thrones than users from any other country.

More in this category: « China OS coming to a computer near you Consumers 'shouldn’t have to pay for piracy' »
Share News tips for the iTWire Journalists? Your tip will be anonymous