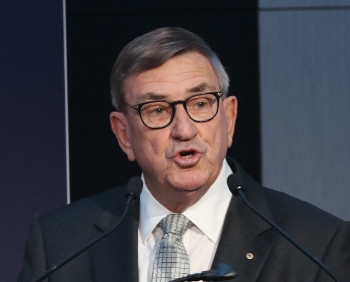 John Lord: "...we're not really getting any concerns expressed to us at all, other than reports in the media." Supplied

Huawei Australia chairman John Lord says the company has not been officially advised either way about its bid to participate in Australia's 5G rollout, even as reports claimed that the company would be excluded.

The Australian Financial Review  reported on Thursday, quoting security sources, that the country's security agencies had recommended against permitting the company to bid for 5G contracts.

Asked about his reaction, Lord told the ABC's Radio National Breakfast program that he was "a little surprised, although I don't believe there's any truth in them, they come from various sources. As far as we're concerned we've not been advised of that and we are still talking openly with the government and passing information both ways.

"And as late as last night I was briefed that our senior team had been down talking to the critical infrastructure centre only yesterday about cyber security and 5G."

As to where the discussions were at, Lord responded: "We're getting a very receptive ear as we put forward how 5G works because we are one of the leaders. Three companies are leading the development of standards and we are one of them. So we are briefing them (the government) on that, we are briefing them on aspects of 5G, how it's structured, and they're accepting that advice. As the minister (Attorney-General Christian Porter) said this morning, they are taking advice from everyone. So we are being welcomed as we continue to talk to government in an open way."

He said government officials had raised no real concerns other than to seek more information about the way 5G was being formed, its similarities to 4G, and how Huawei intended to take 5G forward. "So we're not really getting any concerns expressed to us at all, other than reports in the media."

Asked about the possibility of backdoors being introduced through software updates after the network was built, Lord said that was part of the discussions with government officials and were had with any company. "Because we all explain how we achieve the very best cyber security. And the white paper we released yesterday on 5G and cyber security addresses those types of concerns from a Huawei and global perspective."

He added: "They're just normal discussions people have, showing they protect their equipment and how you give surety to your customers and also to governments."

Asked why he thought it was so difficult to convince some members of the government, some MPs and some in the intelligence establishment that Huawei had no links to the Communist Party, Lord responded: "I guess it's a matter of putting more information out there, trying to tell people about the situation in Huawei.

"We've had this open dialogue with all countries around the world, particularly in the UK, Canada, France, Germany, Spain and Italy. They've accepted that and Huawei is working closely with them on implementing the next level of technology and going ahead. We've offered that to the Australian Government; we're having open dialogue with them, and have done for many years.

"We're still hoping the Australian Government does come to Shenzhen to talk to Huawei some time in the future like other government departments do."

He had no comment on a question as to how much pressure Australia was under from the US to block Huawei. "I can't really comment on that. That's a strategic level of discussion and I'm not in government anymore, so it's a matter of you talking to senior public servants or ministers," he said.

Asked about public comments made by the FBI director Christopher Wray in February that Huawei may be indulging in espionage, Lord said he could not understand why members of government would listen to such claims.

"I've seen the statements, (they are) unsubstantiated. I'm quite surprised seeing senior public servants as they are make those statements. Every time they have made them, Huawei has rebutted them and offered proof, offered visits, more information to explain why they are wrong."

He was asked about the implications for Huawei if it did not get any 5G contracts. "That's a decision in the future. We hope we do not get to that point," was his response.

And he added: "The future for us and the concern is that Australia will drop behind in the new technologies. Huawei is in the top five R&D companies in the world, not just in telecommunications, (we are) among the top five spending on R&D. We are leading in R&D in ICT and that's important."

But he said that if the 5G work did not come through, there would still be business for company in Australia.

"We've still got the 4G networks which are going to be around for a long time. People think 5G is going to come in and switch on (immediately). It's not, it'll move on from 4G to 5G. Which has been our argument - we are doing 4G and as 5G comes in we want to be part of that with our technology."

Asked about claims that Huawei describes the US, Taiwan and Australia as hostile places and how difficult Australia was making it for the company to operate, Lord responded: "I don't think the Huawei global board or Australian board described these three as hostile. We accept the rules of every country in which we operate and we operate in all three.

"Yes, there's a ground level of opposition to us, based on a lack of knowledge of Huawei, and it's up to us to get out there and continue to put the argument about our ownership, our independence as a company and our leading technology and how that can help each individual country."

He was also asked about the undersea cable project between the Solomon Islands, Papua New Guinea and Australia; the contract was initially given to Huawei and then cancelled. Australia is now using aid money to the tune of more than $100 million to build it.

Lord said there was a narrative about such things "and that's what we're here actually to try and weaken, to show the benefits of Huawei in Australia. Yes, there are some who are playing this same line, who won't accept an open dicsussion, who don't seem to want to participate in a two-way discussion. But we are still talking to government and governments make decisions and that's important."

He said his employer was one of the most scrutinised companies in the world. "We are the most prodded and looked at and inspected company in the world. So you should feel even more secure. When i joined this company in 2011, its turnover was US$30 billion. It is reaching US$100 billion this year.

"So around the world, Huawei is being accepted and so are its technologies. We have grown three times in Australia since I joined, in terms of revenue. So people are accepting that this new technology is good."

Lord said he could not comment on why Huawei wanted the Solomons project as a different company, Huawei Marine, a joint venture with a UK company, had made the bid.

He said big corporations like Huawei were operating in a very strategic environment "and that's why it's key that you keep an eye on UN sanctions, US sanctions, and the rules of every country you are in. It's hard, but that's the way you have to be if you are a global corporation."

More in this category: « European Parliament recommends ban on Kaspersky software Australia headed for bright future as a ‘digital’ nation: Keenan »
Share News tips for the iTWire Journalists? Your tip will be anonymous