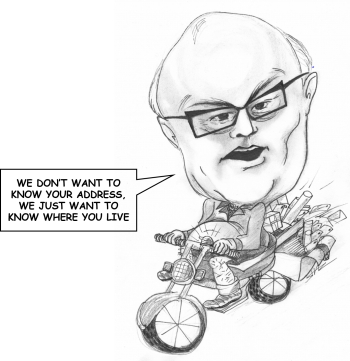 The Government now says that the metadata it wants to access will not include an Internet user’s browsing history. But there is still confusion over just what it does include.

The Government’s confused – and confusing – metadata retention policy continues to cause it problems. Communications Minister Malcolm Turnbull, who was not part of the original decision, has been forced to contradict Attorney-General George Brandis over whether it would or would not include the address of websites visited.

Senior officials of law enforcement agencies have also weighed into the debate, offering their own efforts at clarification, while arguing that their powers to access information should be increased. The process is looking increasingly shambolic.

ASIO head spook David Irvine made a rare public appearance on Friday, fronting a media conference with deputy commissioner of the Australian Federal Police, Andrew Colvin. “We don’t want to observe minutely everyone’s surfing of the web or anything like that,” he said.

“This is not some great mass sur­veillance exercise or mass invasion of privacy of every citizen in Australia.” He might find some people willing to debate him on that. “It is very carefully targeted against those people who give us good reason to suspect they may be engaged in activities which are a threat to national security and the lives of Australians.

“We might receive information that a certain IP address in Australia has been in contact frequently with one of the al-Qaeda websites operating in the Yemen. If we’d just been given a telephone number in the old days we would have gone and looked up a telephone book, but you don’t have telephone books for this.

“So, we would go to the ISP provider and say, ‘can you tell us who had that IP address, at that time, on that day, and they will say it’s person X, and this is the address.”

Malcolm Turnbull is not on Cabinet’s National Security Committee, which announced the policy and leaked it to Rupert Murdoch’s News media group before the rest of the Government, including Turnbull, was even advised of it.

He reportedly had very strong words to say to his colleagues on the stupidity of this strategy. His reaction now seems justified, given the disastrous attempts by George Brandis and Prime Minister Abbott to explain the concept of metadata.

Now Turnbull, not for the first time, has had to try to clean up a mess not of his own making. He and Brandis met with Telstra on Thursday, and were behind the idea of the press conference by ASIO and the AFP. Meanwhile opposition to the metadata retention proposals has grown, helped considerably by the publicity given the issue by the Government’s inept handling of it. It’s a classic balls-up.

Outside of the Government and the agencies being given more money to confront the terrorist threat, it is hard to find anyone with a good word to say about the policy.

One of the main arguments against it is the demonstrated reality that law enforcement and surveillance agencies, once given greater powers, tend to use them for purposes beyond their original intent. Edward Snowden’s revelations about the US National Security Agency’s abuse of its powers, and many documented occasions of Australian police forces misusing the data they can access, are testament to this. If data is available, it will be misused.

Then there is the cost of it all. Tony Abbott said it will cost nothing, because telcos and ISPs are already collecting the data the Government wants to access. This assertion has been roundly refuted, most recently by Optus, Australia’s second biggest telco.

In an internal memo obtained by the Australian Financial Review, Optus said there were hundreds of pieces of information that could be regarded as metadata, and it stores different sorts of data for different periods, and much of it in a form not easily accessible.

“The data which is held varies considerably between fixed, mobile, Internet and web mail services. There is no one definition of metadata. So, an important first step is to seek a common language or definition.

“Placing an over-arching data-retention regime with rapid or automated inquiry capability would be a non-trivial change and cost. Based on work done in 2010 and refreshed in 2012, a data retention regime could cost Optus in the order of $30 plus million to $200-plus million, depending on a range of assumptions about scope and definition.”

But the Government is determined to press ahead. Turnbull’s admission that the policy is still being determined does not alter the fact that it remains the policy, and that eventually it will be translated into proposed legislation.

Which, as we well know, does not mean it will become law. The Government then has to convince the Senate to pass whatever form its legislation ultimately takes. If it handles those negotiations in anything like the same ham-fisted way it has announced its intentions, a betting man would not give you very good odds of it getting through.

The Government has only itself to blame.

More in this category: « Abbott and Brandis to fight terrorism with mandatory metadata retention ACCC’s lonely hearts club ban »
Share News tips for the iTWire Journalists? Your tip will be anonymous