Google's Schmidt drew up draft plan for Clinton in 2014 Featured 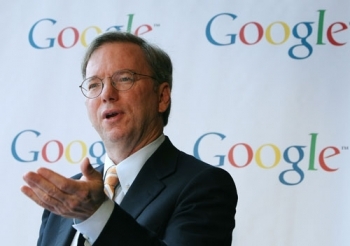 Eric Schmidt, the chairman of Google's parent company Alphabet, submitted a detailed draft to a key Clinton aide on 15 April 2014, outlining his ideas for a possible run for the presidency and stressing that "key is the development of a single record for a voter that aggregates all that is known about them".

Though Schmidt did not mention it, this kind of information is the lifeblood of Google's business.

The email is one of a trove from Podesta's gmail account that was obtained by WikiLeaks. About two weeks prior to this, Podesta wrote to Mook that he had met Schmidt and that he (Schmidt) was keen to be the "top outside adviser".

In the 15 April 2014 email, Schmidt emphasised that what he was putting forward was a draft, writing, "Here are some comments and observations based on what we saw in the 2012 campaign. If we get started soon, we will be in a very strong position to execute well for 2016." It was titled "Notes for a 2016 Democratic campaign".

He divided his comments into categories such as size, structure and timing; location; the pieces of a campaign; the rules; and what he called the key things.

With regard to size, structure and timing, Schmidt wrote: "Let's assume a total budget of about US$1.5 billion, with more than 5000 paid employees and million(s) of volunteers. The entire start-up ceases operation four days after 8 November 2016."

As to location, he did not like the idea of using Washington DC as a base and was keen on low-paid workers. "The campaign headquarters will have about a thousand people, mostly young and hard-working and enthusiastic. It's important to have a very large hiring pool (such as Chicago or NYC) from which to choose enthusiastic, smart and low-paid permanent employees," he wrote.

"DC is a poor choice as it's full of distractions and interruptions. Moving the location from DC elsewhere guarantees visitors have taken the time to travel and to help."

Under "The pieces of a campaign", Schmidt said: "It's important to have strong field leadership, with autonomy and empowerment. Operations talent needs to build the offices, set up the systems, hire the people, and administer what is about 5000 people."

About voters, Schmidt had this to say: "Key is the development of a single record for a voter that aggregates all that is known about them. In 2016 smartphones will be used to identify, meet, and update profiles on the voter. A dynamic volunteer can easily speak with a voter and, with their email or other digital handle, get the voter videos and other answers to areas they care about ('the benefits of ACA to you' etc)."

The Alphabet chairman wrote that "a large group of campaign employees will use digital marketing methods to connect to voters, to offer information, to use social networks to spread good news, and to raise money. Partners like Blue State Digital will do much of the fund raising."

He had plenty of ideas for using the media. "New tools should be developed to measure reach and impact of paid, earned and social media. The impact of press coverage should be measurable in reach and impact, and TV effectiveness measured by attention and other surveys.

"Build tools that measure the rate and spread of stories and rumours, and model how it works and who has the biggest impact. Tools can tell us about the origin of stories and the impact of any venue, person or theme. Connect polling into this in some way. Find a way to do polling online and not on phones."

Schmidt also wanted a score computed for each voter, ranking the probability of them casting the "right vote".

"Analytics can model demographics, social factors and many other attributes of the needed voters," he wrote. "It should be possible to link the voter records in Van (a database) with upcoming databases from companies like Comcast and others for media measurement purposes."

And finally, outlining what he said the key things, Schmidt listed the following:

More in this category: « Schmidt sought top outside post in Clinton campaign Feakin to represent Australian cyber interests globally »
Share News tips for the iTWire Journalists? Your tip will be anonymous